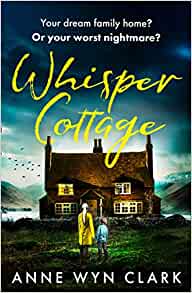 Sounds idyllic, doesn't it? Stina and Jack think so, and a few months before their new baby is due they buy it and move in. The garden is a mess, unlike next door's pristine one, and when they set about tidying it they meet their neighbour, elderly Mrs Barley, who to all appearance is kind and generous, especially with her cakes.

As they settle into village life, Stina learns that not everyone agrees with their view of Mrs Barley; she is not well liked, and some people regard her with suspicion. Her neat, well-kept home is festooned with crystals and poppets and herbal remedies; there are rumours about her 'powers', and also about what goes into her cakes.

Stina prefers to ignore the gossip and accept Mrs Barley's overtures of friendship, especially when baby Elodie is born, and new motherhood proves more challenging than she expected. But seeds of doubt have been sown, and when there are strange noises in the night which Jack doesn't hear, and Mrs B denies all knowledge of the odd-looking man who appears in the garden, Stina begins to wonder what is going on, and at times doubts her own sanity.

For a debut novel, Whisper Cottage is remarkably accomplished – evocative, a little creepy, and laced with secrets and shadows from the past. It's peopled with colourful characters you couldn't fail to recognize if they crossed your path. Stina is clever and sensitive, with an underlying thread of self-doubt. Husband Jack is cheerful, down-to-earth and supportive. Mrs Barley is a sweet and good-hearted old lady, but also reveals another side. Stina's closest friend Georgie is glamorous and outgoing but has a vulnerable streak, and Lucy, another young mum she meets in the village, is subdued and put-upon until she reveals an unexpected core of steel.

The cottages and the village are as beautifully portrayed as are the characters: an ideal environment to bring up a family, but with the flaws that crop up everywhere. Other locations, such as Lucy's chaotic home and the exquisite city flat of Georgie's partner Maryam, come across just as clearly.

The secrets and shadows come home to roost, of course; this is a psychological thriller, after all. Eventually everything falls into place, the mysteries are explained, and life goes on, though possibly not quite as idyllically as Stina was hoping. But that's real life for you; and the past will always come back to bite you if you try to hide it. It all adds up to a jolly good read.
------
Reviewer: Lynne Patrick

Anne Wyn Clark lives in the UK, in the Midlands, with her husband, son and a feisty chinchilla. She has three (now grown-up) children and five grandchildren. She is particularly partial to Italian food, decent red wine (or any coloured wine come to that...) and cake - and has been known to over-indulge in each on occasions. She is passionate about animals and their welfare. Whilst she has enjoyed writing for many years, a love of all things gothic inspired her to try her hand at producing something dark and twisty, culminating in the haunting Whisper Cottage.

Lynne Patrick  has been a writer ever since she could pick up a pen, and has enjoyed success with short stories, reviews and feature journalism, but never, alas, with a novel. She crossed to the dark side to become a publisher for a few years and is proud to have launched several careers which are now burgeoning. She lives in Oxfordshire in a house groaning with books, about half of them crime fiction.
Posted by Lizzie at 14:13