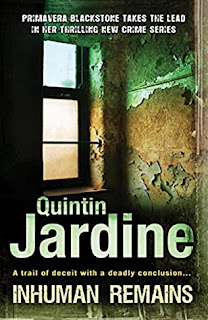 Following the death of her husband Primavera Blackstone has settled in Spain with her son Tom. Although Primavera has started a new chapter in her life her thoughts turn often to Oz Blackstone.  Whilst we learn of the final chapter of their lives from the opening part of book there is still, uncertainty as to Oz Blackstone’s motives.

But Primavera’s mind is taken off Oz when Auntie Ade arrives unexpectedly and asks for Primavera’s help in locating her son Frank, who seems to have disappeared. The search takes Primavera to Seville where she becomes privy to a shady project involving millions. And then on a nightmare cat and mouse game across Spain as she endeavours to keep out of the clutches of baddies.  But who exactly are the bad guys?

Quintin Jardine, was born in Motherwell, but now lives in East Lothian and in Spain, with his wife and extended family. He ditched a token attempt to study law for more interesting careers in journalism, government propaganda, and political spin-doctoring. He moved into media relations consultancy, before realising that all along he had been training to become a crime writer. Now, fifty-five novels later, he never looks back. He can be tracked down through his blog:
http://quintinjardine.me
Posted by Lizzie at 16:25