‘The Murder Box’ by Olivia Kiernan 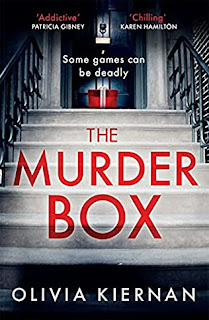 “Life and time are short”

Detective Chief Inspector Frankie Sheen and her team are engaged on a high-profile missing persons enquiry. Sheen and Detective Baz Harwood, her friend and colleague in the Bureau for Serious Crime, believe that TV celebrity Teddy Dolan could already be dead, but he has friends in high places and this, along with the public interest in his disappearance, has thrown a spotlight on their officers. They can’t let up on their search until Dolan, or his body, is found.

When a red box is delivered to the station addressed to Sheen, the DCI, who’s about to celebrate her birthday, thinks it must be a gift. She is intrigued when she reads the accompanying card,

“Welcome to The Murder Box, the addictive murder-mystery game.”

The puzzle seems to be a timely distraction from the perplexing Dolan investigation, but then Neve Jameson arrives at the station to report that her friend, Lydia Callin, is also missing. During Neve’s conversation with Frankie, some disturbing facts come to light.

It soon becomes clear that The Murder Box is far more sinister than its Cluedo cousin. The mysterious disappearances lead Sheen and her officers into a chilling, murderous maze which threatens to jeopardise everyone who plays the game, including the battle-hardened DCI. The tension ramps up when the police team realise that the game has a deadline, and the Bureau finds itself in a race against time to discover the meaning and significance of evidence embedded within the game.

Olivia Kiernan's prose, sharp as a pathologist’s scalpel, carves out a thrilling narrative as the police team are led, and misled, through the taunting puzzle at the centre of the novel. Characters are carefully described and evoke empathy and interest.  A particularly touching example is Lydia’s father, a relatively minor character, whose response to life’s tragedies both moves and inspires. Similarly, the author’s description of the interaction between Frankie and Baz portrays the confusion, exasperation and poignant sense of loss that can happen when relationships are fractured by events.

The Murder Box is the fourth Frankie Sheehan book and works perfectly well as a standalone novel. It had me hooked from beginning to end. As one might expect in a plot that revolves around a murder mystery game, there are plenty of red herrings in the book.  Expect to be teased and surprised as the narrative moves towards a nail-biting dénouement.  Highly recommended.
------
Reviewer: Dot Marshall-Gent

Olivia Kiernan is an Irish writer living in the UK and author of crime thriller, Too Close To Breathe. She was born and raised in County Meath, near the famed heritage town of Kells and holds an MA in Creative Writing awarded by the University of Sussex.

Dot Marshall-Gent worked in the emergency services for twenty years first as a police officer, then as a paramedic and finally as a fire control officer before graduating from King’s College, London as a teacher of English in her mid-forties.  She completed a M.A. in Special and Inclusive Education at the Institute of Education, London and now teaches part-time and writes mainly about educational issues.  Dot sings jazz and country music and plays guitar, banjo and piano as well as being addicted to reading mystery and crime fiction.
Posted by Lizzie at 17:09