‘Murder In Bloom’ by Lesley Cookman 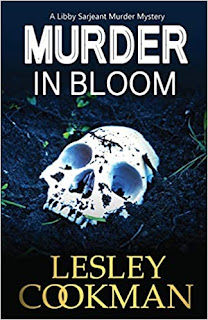 This is the fifth book in the series featuring actress/amateur sleuth Libby Sarjeant, with a ‘J’. Libby is of mature years with three grown-up children and has settled in a small village in Kent. Currently her student son Adam has moved in with her whilst he is helping with the renovation of the garden at Creekmarsh Place owned by television personality Lewis Osbourne.

When during the course of the renovations a skeleton is uncovered, Lewis calls on Libby, now a minor celebrity owing to her previous sleuthing. And Libby calls on her friend Fran, who has physic powers. Fran is in the course of organising her wedding to Guy, but immediately rallies to the cause.  When the police turn up they are less than pleased to find Libby in situ.  Particularly Superintendent Bertram otherwise known as, Big Bertha.

Lewis appears to have obtained the house in less than clear circumstances and the story abounds with devious dealings, hidden passages, and secret rooms. But a second murder throws all their theories out the window and the reader is kept on their toes as they try to work out who did what to whom and above all why?

Throughout the mystery is the continuing saga of Libby’s relationship with Ben, a man she met when first she got involved with a murder at the Laurels nursing home. Both of mature years, their relationship is fraught with the pitfalls of a new relationship in later life. With the news of Fran and Guy’s impeding nuptials Ben becomes unsettled - which in turn unsettles Libby, who is not certain that she is ready to take the next step. The matter is handled delicately and with sensitivity and I found both the mystery and the personal relationship intriguing.  Highly recommended.
-----
Reviewer: Lizzie Hayes

Lesley Cookman started writing almost as soon as she could read and filled many Woolworth's exercise books with pony stories until she was old enough to go out with boys. Since she's been a grown up, she followed a varied career as a model, air stewardess and disc jockey, she's written short fiction and features for a variety of magazines, achieved an MA in Creative Writing from the University of Wales, taught writing for both Kent Adult Education and the WEA and edited the first Sexy Shorts collection of short stories from Accent Press in aid of the Breast Cancer Campaign.  The Libby Sarjeant series is published by Accent Press, who also published her book, How to Write a Pantomime, with a foreword by Roy Hudd.   Lesley is a member of the Romantic Novelists' Association, the Society of Authors and the Crime Writers' Association.
Posted by Lizzie at 17:02