‘Iced Under’ by Nadine Doolittle 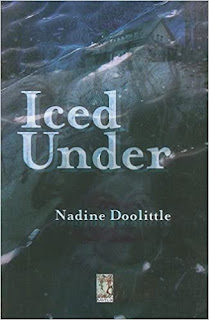 Following a painful divorce from her TV director husband, Sara Wolesley takes as her settlement a cottage on Hennessy Lake in West Quebec. It was previously the home of her late friend Lester, but it is not until she moves there in late December with her two children, Darcy and Brittany, that she realises that in her distraught and unhappy state of mind she has accepted a very bad deal.  The cottage is both isolated and dilapidated, the pipes are frozen, there are no comforts of any kind, and she has no money, and very little chance of earning any.

It is said that things look better in the morning – but they don’t. As Sara takes stock of their situation, she realises that she has taken city kids and dumped them in a cold isolated place where the temperatures are minus forty degrees Celsius, they do not have the right clothes to combat the cold, and she cannot seem to get the cottage warm.  With the battery gone in the jeep, and almost out of food, Sara treks to the nearest village and the one and only store. She sees a young girl smiling from a bulletin board, and from the store owner Iris Ramsey she learns of the disappearance of seven-year-old Oralee Pelletier some five months before.

With her husband now in a new relationship and threatening to obtain custody of the two children, Sara reaches desperation point and goes out to the frozen lake to try and break through the ice to get some water. She sees a young girl, who must be Oralee, trapped and frozen beneath the ice.

Desperate for money, Sara answers an advertisement for a cleaning job and discovers it is for a man in the cottage across from hers. She learns that he is the sole survivor of a tragic family accident. Through her trips to the village, where she meets Oralee’s mother, Sara hears much speculation about Oralee’s death, but nothing seems to hang together and slowly she is drawn into the mystery.

This book kept me enthralled. There is one part where I actually felt the rising panic that was gripping Sara as matters began to spiral out of her control.  So clever was the writing that I put the book down for a moment and tried to think how I could have resolved the situation, and I could only feel panic. The sense of place, the cold, the fear, and the isolation seeps into your bones as you read. Highly recommended.
-------
Reviewer: Lizzie Hayes

Nadine Doolittle studied Theatre Arts at Vancouver's prestigious Studio 56 programme, and subsequently shifted her creative focus from acting to writing when she joined Toronto's Alliance Entertainment as a creative associate. This is Nadine's first novel.