‘A Drop of Chinese Blood’ by James Church 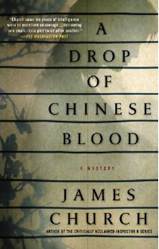 I have not read any of Church’s books before - I see from the book’s details that he has several previous crime novels set in North Korea but with a different protagonist who is, however, a player in this book.

Our protagonist is Major Bing, nephew of the previous subject Inspector O of North Korea. Bing is chief of the Chinese Ministry of State Security in a small town on the Chinese border with North Korea and his uncle is living in China with him. This is a spy story with a large helping of the absurd to be seen in the dealings of Major Bing with his superiors, subordinates and everyone else! Conversations between Bing and his uncle provide a lot of the material of the book. Unfortunately for Bing he is, to his uncle’ the sole scrutable Chinese official in the long history of this peacock strutting empire.’ His uncle on the other hand is a very inscrutable Korean so that Bing is functioning in a constant state of confusion.

This story begins with the arrival on Bing’s doorstep of the beautiful Madame Fang wearing ’ the sort of pearls that make you think oysters know what they’re doing.’ Bing goes to work leaving the lady with his uncle; at the office he muses on the sudden introduction by HQ of a ’Read Only’ stamp of as suggesting that they think the staff might nibble on the paper. I enjoyed this continual cynicism towards the Chinese bureaucracy very much. Church is an American ex-Intelligence officer apparently, so he knows about these byways.

The book is full of lovely references to the arcane ways in which Intelligence proceeds in China - the need to know a person’s connections with people of importance in government, the way operatives are doing unknown assignments for other parts of the organisation, the enormous mounds of paperwork, the need for detailed local knowledge and the likelihood of being blamed if anything goes wrong. Bing sums it up as ’there is a delicate balance between knowing enough about operations and knowing too much, especially if something went wrong.’

All spy stories operate in a mysterious hinterland where friend and foe are indistinguishable and change from one condition to the other very easily. This book fits into that hinterland very well since the setting and attitudes are different to those of the Western world. I liked it but I think it might be a difficult read for anyone without any knowledge of or interest in the Far East.
------
Reviewer: Jennifer Palmer
James Church has written four books about Inspector O of North Korea starting with A Corpse in the Koryo.

James Church is identified on the back cover of his novels as "a former Western intelligence officer with decades of experience in Asia". He grew up in the San Fernando Valley in the United States and was over 60 years old in 2009. His "Inspector O" novels have been well-received, being noted by Asia specialists for offering "an unusually nuanced and detailed portrait" of North Korean society. A Korea Society panel praised the first book in the series for its realism and its ability to convey "the suffocating atmosphere of a totalitarian state". A panelist as well as The Independent's and the Washington Post's reviewers compared the protagonist to Arkady Renko, the Soviet chief inspector in Martin Cruz Smith’s Gorky Park, for providing "a vivid window into a mysterious country".