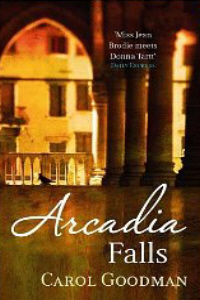 Following her husband’s death Meg Rosenthal leaves the wealthy East Coast with her daughter Sally and joins the staff of a smart private school, Arcadia College to teach and pursue her academic fascination with folklore and nineteenth century literature.

Arcadia College, set in a valley against the side of a mountain and on three side’s thickly wooded countryside, was the home of Vera Beecher who established it in 1928 as a colony for artists to develop their talents, particularly female artists, although Virgil Nash was somehow included.  Now run by Dean Ivy St Clare, Meg quickly discovers Vera and her beliefs are still very much alive.  Meg is allocated a cottage in the woods in which Vera and her friend Lily Eberhardt lived for nineteen years until tragedy struck in 1947 when Lily died.  The cottage in the woods is frequently shrouded in mist and evoked a fitting environment for the theme running through the book which is the disturbing tale of ‘The Changeling Girl’ and the many interpretations that can be placed on the story.

To continue her own studies Meg obtains from Ivy Vera’s diaries, and later discovers Lily’s journal, in which she reads, ‘we came to paradise already carrying the seeds of its destruction.

The style of the setting was, to me reminiscent of ‘Miss Pym Disposes’ by Josephine Tey, probably evoked by the vivid characterisation of the female students. Within a day of Meg settling in one of the students is found dead.

This is both a beautiful piece of writing and an intriguing mystery to which one must reach back to the past for a solution. I was totally transported to the period and found myself looking over my shoulder as the suspense built to a frightening level.

Carol Goodman gives the reader a thought-provoking tale and an interesting mystery to which she provides a satisfying conclusion, but the tale of The Changeling Girl and its interpretations may remain with you a long time.

I cannot recommend this book to highly, it is a must read.
----
Reviewer: Lizzie Sirett

Carol Goodman graduated from Vassar College, where she majored in Latin. After teaching Latin for several years, she studied for an MFA in Fiction. Her writing has been published in a number of literary magazines. She currently teaches writing and works as a writer-in-residence. She lives in Long Island, USA.