‘Blood Ties’ by Jane A Adams 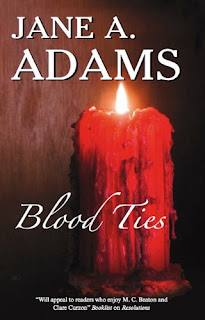 Needing a break from the recent stresses of work Naomi Blake uses the tried and tested method of sticking a pin in the map to select a holiday spot, and she can’t cheat as ex-police officer Naomi was blinded in an accident. The pin lands on Somerset and so she and her partner Alec set off for some rest and recuperation.

They find a pleasant B & B and take their evening meals at The Lamb, the pub next door., Susan the manager is friendly, and a fount of local information and gossip.  She introduces them to eccentric Eddy who sits in the same corner night after night poring over his maps.  They learn that Eddy used to teach history but in the space of two years his wife died of cancer and his teenage daughter was killed in a car accident. Eddy has never actually recovered.

When Eddy is found dead in his cottage at the foot of the stairs it looks like an accident – but is it.  Gradually Alec and Naomi find themselves drawn into helping Susan to whom it has fallen to try and trace any relatives.  As they search through his cottage it becomes apparent that Eddy is quite different from the eccentric chap who sat in the pub every evening.  Then matters take a serious turn.

Seeing someone every day for twenty years and then discovering that you don’t know anything about them is fascinating.  Do any of us really know the people around us, we think we do, but do we?  If we did why would seemingly happy people whose lives are an open book just up and walk out one day!   An intriguing mystery.Recommended.
-----
Reviewer: Lizzie Hayes

Jane A Adams was born in Leicestershire, where she still lives. She has a degree in Sociology and has held a variety of jobs including lead vocalist in a folk rock band. She enjoys pen and ink drawing; martial arts and her ambition is to travel the length of the Silk Road by motorbike. Her first book, The Greenway, was shortlisted for the CWA John Creasey Award in 1995 and for the Author's Club Best First Novel Award. Jane writes several series.  Her first series featured Mike Croft. Several books featuring DS Ray Flowers. Seven titles featuring blind Naoimi Blake, and six titles featuring Rina Martin. In 2016 she started a series set between the two World Wars and featuring Detective Inspector Henry Johnstone and his sergeant, Micky Hitchens.  Bury Me deep is the first book in a series featuring Detective Inspector Rozlyn Priest.  Jane has also written several standalone novels. She is married with two children.