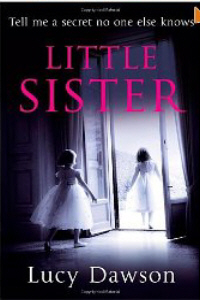 The story opens with Anya, gleeful that she is in Mexico in a warm climate with a good-looking guy escaping January in the UK where her sister Kate, married with a baby, and will be shivering in the winter cold.

A late-night telephone call to Kate informs her that her younger sister Anya has been missing for two days. She was last seen with a diving instructor in a relatively isolated region of Mexico. Police have recovered her clothes and personal belongings, and they are now sending divers down to the caves.  Kate goes into melt down, and I mean melt down, she screams kidnapping, abduction, and proceeds to alert everyone she can think of.  The Foreign office act as intermediary, but still Kate goes off at a tangent, unwittingly putting her sister in further danger.

The story is related from two first person’s point of view, that of Kate and Anya.  As the story unfolds, we learn of a family tragedy that could go some way to explaining Kate’s totally over the top reaction to the fact that her sister is missing. Her parents now separated, her husband suggesting caution until we have more facts, Kate refuses to listen to anyone. She wants action.

Whilst part of the narrative is by Anya, we do not know what has happened to her, she is clearly in trouble, scared and alone, but where or why we don’t know. The author cleverly racks up the tension as we become aware that wherever, Anya is, time is running out.

A psychological suspense, that only begins to make sense as Anya alone and frightened relives a period she has tried to put behind her.
-----
Reviewer: Lizzie Hayes
Earlier books are, His Other Lover, What my Best Friend Did, The One that Got Away.

Lucy Dawson studied Psychology at Warwick University before becoming a Journalist and children’s magazine editor. Her first bestselling book – His Other Lover – was published in 2008. Since then, she has published four other novels and her work has been translated into numerous other languages. She lives in Dorset with her husband and children.
Posted by Lizzie at 19:52