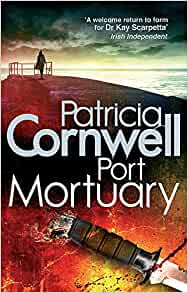 It several years since I have read a Kay Scarpetta adventure. It appears that in the intervening period she has married Benton Wesley – a man who has been declared dead, been in witness protection and is now back with Kay. She is unsure if he is still with the FBI, but is certain that he is in contact, if not actually working for them.

Kay has spent six months as medical examiner at Port Mortuary, a military air base, where bodies are received from the battlefield, but is now returning to her headquarters in Cambridge, Massachusetts. Her return is not as she had hoped. Things seem off-kilter to her. Jack Fielding, the man she left in charge, appears to have let standards slip alarmingly, and also seems to be unaccountably absent.

The unexpected death of a young scientist within a stone’s throw of her own home in Newton Woods has everyone jittery, for he had bled out whilst in the mortuary cooler – could he have been alive when he was put in there? The thought is horrifying.

Written in the first person, we follow Kay’s thoughts as she grapples not only with her unsatisfactory return, but also with secrets in her past and uncertainty about her own judgements. Most unsettling is the thought that Benton could be lying to her. Very cleverly written as her mind veers from one thought to another, sometimes bordering on the paranoid, but if memory serves me right that is very much Kay Scarpetta. Of course being with her niece Lucy could also have that effect – she is one scary lady.

This is a must for you lovers of forensic detail and Robotic technology.
-----
Reviewer: Lizzie Hayes

Patricia Cornwell was born in 1956. She is the author of a series of crime novels featuring the forensic examiner Dr Kay Scarpetta are international bestsellers. She is also the author of two police procedurals and the biography of Ruth Graham. She divides her time between Virginia and New York.