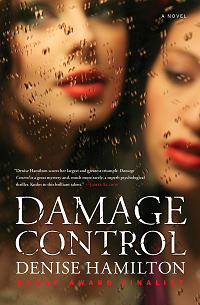 On the very first page of the prologue to Damage Control, the terrific new book by Denise Hamilton, the reader meets high school student Maggie Weinstock.  Fast forward sixteen years:  Maggie is now Maggie Silver, divorced, and 33 years old.  The crux of the plot stems from that earlier time frame, when Maggie, in her first two years of high school, met the Paxtons, who became the “golden ones” in her young life.  Before “BFF” became part of the vernacular, their daughter, Anabelle, was that and more – she was everything Maggie admired and, to some extent, envied.  And her good-looking brother, Luke, was a Surf God.

Maggie now works for the top crisis management firm in L.A., doing corporate PR.  The newest client to whose case she is assigned is a U.S. Senator with a wife and grown children, a probable candidate for vice president in the next election, whose 23-year-old female aide has been found murdered, in a scenario reminiscent of the one involving Gary Conduit and Chandra Levy a decade ago.  The senator is none other than Henry Paxton, Anabelle’s father, who had been a father figure and a role model to Maggie all those years ago.  Welcome to the wonderful world of Damage Control, or spin.

This novel provides a fascinating glimpse, in a schadenfreude way, into a world about which most readers know little.  Maggie suspects that her past involvement with the Paxton family is what brought the assignment to her desk.  She believes, and tells her colleagues, that no member of that family is capable of murder.  The response is that “everyone’s capable of murder if you give them the right reason.”  But she is determined to prove that no member of the family is guilty. The back-story of Maggie’s friendship with Anabelle, and how it ended, is the lens through which Maggie views the Paxtons.  In the end, it’s all about the secrets we keep from one another.  As with the earlier books by Ms. Hamilton, comprised of the five books in the Eve Diamond series as well as The Last Embrace, a standalone, Damage Control is thoroughly entertaining, and is recommended.
----
Reviewer: Gloria Feit

Denise Hamilton is a Los Angeles-based writer-journalist whose work has appeared in the Los Angeles Times, Wired, Cosmopolitan, Der Spiegel, and New Times. A reporter for the L.A. Times for ten years, she covered not only L.A. stories, but also the collapse of communism in Eastern Europe, the breakup of the Soviet Union, and burgeoning youth movements in Japan. A Fulbright scholar, she taught in the former Yugoslavia during the Bosnian War. She lives in a Los Angeles suburb with her husband and two young children.
Posted by Lizzie at 15:18