‘Blind Dates Can Be Murder’ by Mindy Starns Clark 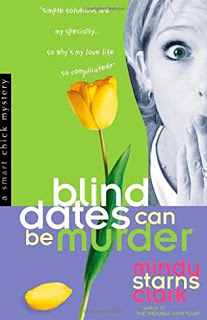 This story bowls along at a fast clip with an effective pattern of alternating narrators.  The initial event is when Jo Tulip, the heroine, has a blind date with a man startlingly unlike his photograph who proceeds to drop dead in the restaurant where they have met.  The resulting police investigation unearths strange happenings.   Jo Tulip is a good central character as a rather disillusioned single woman who runs a business based on a web site offering household hints and handy advice - such tips are provided as introductions to chapters narrated by Jo.  The web site actually exists and can be visited.   There is a parallel love story and events involving a separate set of characters who gradually move towards meeting each other and sparking off a potentially catastrophic climax.

The cover describes this book as a Smart Chick Mystery and a note on the back cover reveals that this is the second in a series with the third and final episode to be published soon.  I did not find it difficult to read Blind Dates can be Murder without having previously read The Trouble with Tulip since the bones of that first story were crafted into this one.  I did find the final paragraph of the book slightly irritating since it so obviously led into the next adventure, but it is an understandable plot device in such circumstances.

Mindy Starns Clark can tell a very good story and her characters are, on the whole, believable.  The mystery, as the converging characters gradually reveal their concerns is very well sustained and the thrills of the last section are excitingly piled up.

There is no doubt that detective fiction frequently represents a struggle between good and evil with, hopefully, the bad getting their just desserts and the good their reward so readers may find this a satisfying conclusion. ----------
Reviewer: Jennifer S. Palmer

Mindy Starns Clark is the bestselling author of the inspirational Million Dollar Mysteries and the Smart Chick Mysteries, as well as the nonfiction how-to book The House That Cleans Itself. Mindy is also the author of numerous plays and musicals which have been performed all over the United States. She has written textbooks, articles, short stories, and more than 75 computer software manuals. Other writings appear in the anthologies What the Wind Picked Up (Inspirational), Death Knell V (Mystery), and Divine Secrets of the Yahweh Sisterhood (Inspirational). A former singer and stand-up comedian, Mindy lives with her husband and two teenage daughters near Valley Forge, PA. She enjoys speaking to churches, civic groups, and libraries across the country. Her unique blend of humour and insight make her an audience favourite.
Posted by Lizzie at 12:12