‘All Things Undying’ by Marcia Talley 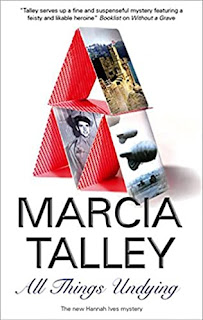 
Hannah Ives and her husband Paul are enjoying a holiday in Devon, the UK's Riviera, having done a house swop with their friends Robert and Sally Gardner. On a shopping expedition in the town Hannah meets Susan Parker, who introduces herself as a medium and clairvoyant.  Although sceptical of clairvoyants, when Susan relates several things to her Hannah is considerably spooked.

Cathy, an American who is visiting Dartmouth, has discovered, through reading a book called The Forgotten Dead, that her father died in England at Slapton Sands in 1944, and asks Hannah to drive her to the memorial at Torcross, as she is having problems driving in England.  Drawn in by Cathy's passion to find what happened to her father, Hannah introduces Cathy to her friend Alison whose father was one of the people evacuated during the 1944 DDay exercise. But he seems reluctant to disclose any details.

While Hannah is helping Cathy, she learns that Susan is a well-known television medium who is doing a program relating to the 1944 evacuation, and the more Hannah learns the more intrigued she becomes, but before she can pursue further Susan's disclosures to her by having a private consultation, Susan meets with an untimely death.

Was Susan's death an accident? Hannah begins to wonder, and how does it tie up with events that happened more than fifty years ago.

MarciaTalley's first book Sing it to Her Bones, was published in 1999. Since then she has published seventeen further books in the series featuring breast cancer survivor Hannah Ives. A former librarian, she took early retirement in 2000 to write full-time. She divides her time between Annapolis, MD and an antique sailboat in the Bahamas.