‘The Rome Prophecy’ by Jon Trace 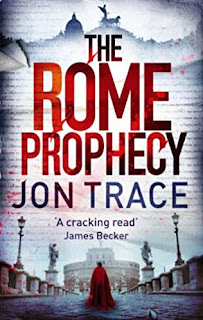 Valentina Morassi has now been promoted to Carabinieri Captain and moved to Rome.  Also on route to Rome is ex-priest Tom Sharman who had teemed up with Valentina in ‘The Venice Conspiracy’

Things look good for Tom and Valentina but before they can explore their feelings Valentina is called into work. A severed hand has been found inside the famous Bocca Della Verita at the Chiesa Santa Maria, and a woman has been found walking the streets dressed in a white robe covered in blood and carrying an antique sword.

This is a fast-paced thriller plunging the reader into centuries past to uncover a sinister movement that operates beneath the beauty that is modern day Rome.

Whilst the investigation is taking twists and turns that keep Valentina on her toes, she has problems with her new boss and her most immediate subordinate and is thus beset on all sides. The clues are there, but clearly bound up with the past, and here Tom’s expertise on religious matters comes into play. As they begin to follow the trail and uncover the secrets of the past I was totally hooked and stayed up well into the night to finish it.
Highly recommended.
-----
Reviewer: Lizzie Hayes

Jon Trace is the pseudonym for the Chief Creative Officer of one of the world's largest global television production companies. Trace is also an internationally published thriller writer, an award-winning documentary maker, and creator of multimedia interactive games.
Posted by Lizzie at 15:42