‘The Judas Heart’ by Ingrid Black 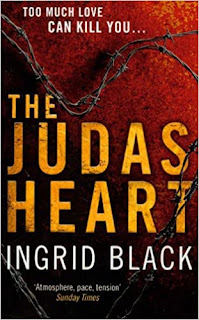 When former FBI agent Saxon sees the face of her colleague ex-agent Leon Kaminski in a bookshop she is transported back to the last time she had seen Kaminski, then as now, he placed his finger to his lips in a shushing motion and then just disappeared.   But this time things are very different because Saxon is in Dublin and a call to another ex-colleague elicits the information that Leon Kaminski is indeed missing not for the first time but following his wife’s murder he seems to have dropped completely out of sight. Saxon decides to track him down.

Meanwhile Superintendent Grace Fitzgerald, Saxon’s partner, has a new boss, one who is keen to tap into Saxon expertise in their murder hunt for the killer of Marsha Reed. Investigation into the death of Marsha Reed produces many lines of enquiry, some linked with the theatre world, and some disturbingly leading in the direction of Leon Kaminski.

I have enjoyed the all the books in this series, but this one in particular as it was a good mystery that kept me guessing, and as it was read by Tara Ward who has a lovely voice. She also did an excellent job with the different Irish accents - Fitzgerald’s soft lilt and Stella’s harsh northern accent. A superb job.
--------
Reviewer: Lizzie Hayes

Ingrid Black is the pseudonym of Eilis O'Hanlon and Ian McConnel, a husband-and-wife writing team who live with their family in Belfast, Northern Ireland. They are the creators of ‘Saxon and Grace Fitzgerald’, former FBI agent and Detective Chief Superintendent with the Dublin Metropolitan Police’s Murder Squad.
Posted by Lizzie at 11:21