‘A Higher Duty’ by Peter Murphy 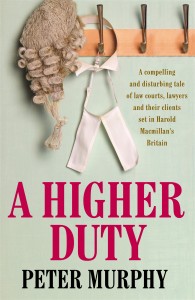 A trend seems to have arisen for classifying novels as crime/mystery/thriller when they have only the most slender claim to the label. A Higher Duty has a legal background, and someone dies in dubious circumstances in the opening chapter, so perhaps its claim is slightly stronger than some; but the background is largely family law, and the death requires no investigation.

Instead, the real crime in this thoughtful, vividly evoked story is an ongoing one, committed for centuries against most of the population by a small but powerful section of it. Set in the early 1960s, it explores a darker side of the legal system in which the class system was exploited, minorities were regarded as ‘not our sort’, and women, however able, were dismissed as of no account because of their inconvenient habit of bringing the next generation into existence.

Several loosely connected story strands come together to form the kind of neat conclusion in which justice is done after a fashion: probably the best that could have been achieved at the time, but still inclined to make a 21st century reader either blink with surprise or grind his/her teeth, depending on gender and how many of the intervening decades and social changes s/he has lived through.

The phrase ‘persons of no significance’ crops up uncomfortably often: a strong indication that half a century ago attitudes and behaviour were very different. Murphy succeeds in portraying them with a light, deft touch which avoids the ‘preachy’ pitfall some authors fall into when reconstructing a past which is well within living memory. He makes a jolly good fist of recreating the social background which defined that era, and he does it in a highly readable way, using the old-fashioned device of good storytelling: creating a believable situation and engaging, rounded characters who draw the reader in and makes him/her care what happens to them.

Some of them are likeable, others less so, but there is no black and white, no good guy required to triumph or bad one who has to get his comeuppance. The ending is tidy, and probably inevitable, though whether it makes for the kind of satisfying denouement aficionados of crime fiction expect is open for debate. But it is an absorbing read, and one which will make you think, and consider yourself fortunate to be living in a world which has moved on.
------
Reviewer: Lynne Patrick

Lynne Patrick  has been a writer ever since she could pick up a pen, and has enjoyed success with short stories, reviews and feature journalism, but never, alas, with a novel. She crossed to the dark side to become a publisher for a few years, and is proud to have launched several careers which are now burgeoning. She lives in Oxfordshire in a house groaning with books, about half of them crime fiction.
Posted by Lizzie at 11:36