‘Lockdown’ by Peter May

Peter May (no relation!) is now a successful and highly thought of crime writer with several series to his name. But in 2005, although he had written several crime novels, he was as yet unpublished. He was inspired by the widespread deadly ‘bird-flu’ to tackle the effect of a pandemic upon Britain, in particular London. He sent the resultant manuscript to some publishers, but their response was that the idea of a lockdown of London resulting from a pandemic was not credible. So, he put the rejected manuscript in a file and there it languished for 15 years. Little did those publishers, or anyone else, know!

And then, in 2020, the world was struck by coronavirus and Peter extracted his novel and sent it to his publisher who, of course, took it on.

The novel begins with London already struck down by the virus with hundreds of thousands dead, including the Prime Minister, a breakdown of law and order, and the army exercising iron control of the streets. There is an anti-virus drug, FluKill, manufactured by a French-based pharmaceutical company, but supplies are limited although the police are among those entitled. However, the work of the Metropolitan Police continues as best it can, although the virus has taken has taken a deadly toll of many of its officers so that when a holdall full of human bones is discovered during demolition work on a building site, the only officer who can be spared is Jack McNeil who, with his marriage having fallen apart, is taking early retirement and is anxious to spend as much time as he can with his young son Sean. Nevertheless, McNeil is intrigued by some aspects of the case, particularly when the forensic pathologist Tom Bennett informs him that the bones are those of a child, are not old, and had been chemically cleaned. McNeil’s girlfriend, wheel-chair bound Amy Wu, whose speciality is facial reconstruction, tells him that the child had been a girl, probably Chinese, who had not spent much of her life in the UK, and had a cleft palate which would have resulted in a severe hare-lip. And when, in the course of the novel, tragedy hits McNeil’s family; he is devastated by this and all the more determined to discover the truth about the young girl’s death.

A parallel narrative is that of the young hitman, Pinkie, who has modelled himself on the protagonist of Grahame Greene’s famous pre-war novel, Brighton Rock. He is being instructed by a mysterious Mr Smith to ‘tidy up’ various people including those whom McNeil is enquiring into.

This is a gripping story with scenes set in a London which is familiar yet unfamiliar, and an increasing body-count and a dramatic ending. The story is grounded by an impressive amount of research and McNeil, despite his readiness to use his fists, is a sympathetic character with convincing love for his son and for Amy. Recommended
------
Reviewer: Radmila May

Peter May was born and raised in Scotland. He was an award-winning journalist at the age of twenty-one and a published novelist at twenty-six. When his first book was adapted as a major drama series for the BCC, he quit journalism and during the high-octane fifteen years that followed, became one of Scotland's most successful television dramatists. He created three prime-time drama series, presided over two of the highest-rated serials in his homeland as script editor and producer, and worked on more than 1,000 episodes of ratings-topping drama before deciding to leave television to return to his first love, writing novels. He has won several literature awards in France, received the USA's Barry Award for The Blackhouse, the first in his internationally bestselling Lewis Trilogy; and in 2014 was awarded the ITV Specsavers Crime Thriller Book Club Best Read of the Year award for Entry Island. Peter now lives in South-West France with his wife, writer Janice Hally.

Radmila May was born in the U.S. but has lived in the U.K. since she was seven apart from seven years in The Hague. She read law at university but did not go into practice. Instead she worked for many years for a firm of law publishers and still does occasional work for them including taking part in a substantial revision and updating of her late husband’s legal practitioners’ work on Criminal Evidence published late 2015. She has also contributed short stories with a distinctly criminal flavour to two of the Oxford Stories anthologies published by Oxpens Press – a third story is to be published shortly in another Oxford Stories anthology – and is now concentrating on her own writing.
Posted by Lizzie at 15:50 No comments:

‘Rather to be Pitied’ by Jan Newton 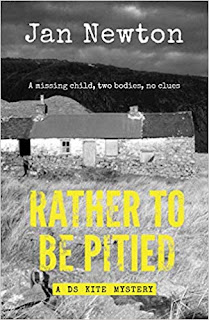 School children, preparing for the Duke of Edinburgh Award, stumble by chance on a dead body near a mountain track in mid-Wales and their teacher summons the local police. Detective Sergeant Julie Kite is newly promoted and has been working in Wales for only a few months. She had thought that this was a quiet, peaceful area where little happened, but this is the second murder investigation she has been involved in since she moved from her native Manchester. Julie misses her friends and family in Manchester and has found the change of lifestyle difficult to adapt to, both because it takes so long to get from place to place and because in the Welsh towns and villages everybody seems to know everybody else. She cannot go anywhere in company with her senior officer, Detective Inspector Craig Swift, without him being greeted by name. Julie’s husband, Adam, has embraced their change of circumstances with its opportunities for mountain exercise, although Julie wishes that he had not also embraced a vegan lifestyle, which means she is forced to resort to stealthy take-away meals in her car.

The body is in a state of decomposition and so emaciated that it is not until the pathologist starts the post mortem that she realises the victim is a young woman. Further examination reveals that she has at some point had a child. The police struggle to identify her but when they manage to do so the case grows even more complicated as their investigation reveals that several more people have gone missing in the last few months and they cannot be sure whether they have any connection with the case. They trace the last place the victim stayed to a local bed-and-breakfast but are uncertain whether it is a coincidence that the owner’s husband had packed up and left without a word. When they discover the victim’s identity, it seems more than chance that the victim’s next-door-neighbour has also left her home, leaving a note for her husband begging him not to look for her. Most important and worrying of all is the question of what has happened to the victim’s small son. When another body turns up in mid-Wales the case grows even darker and more complex, and its solution hinges on whether Julie can win the confidence of a badly traumatised ex-serviceman.

Rather to be Pitied is the second book in the series featuring Julie Kite and the ranks and relationships of the police team were slightly confusing in the first few chapters for a reader who had not read the first book. Apart from that, it was excellent in every way. The plot was complex but coherent and intriguing, and the descriptions of the Welsh countryside were vivid and evocative. Above all, the characterisation was superb; the whole police team were realistic and likeable, and both Julie Kite and Craig Swift were thoroughly engaging characters. I would recommend Rather to be Pitied to any reader anyone who enjoys an intelligent police procedural with an awareness of social issues. A page turner.
------
Reviewer: Carol Westron 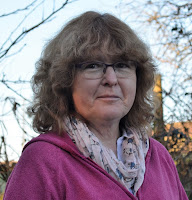 Jan Newton grew up in Manchester and Derbyshire, spending her formative years on the back of a pony, exploring the hills and moorland around her home. She lived and worked in London and Buckinghamshire for 19 years until moving to Wales in 2005. Jan has won several writing competitions, including the Allen Raine Short Story competition, the WI Lady Denman Cup, and the Oriel Davies Gallery competition for nature-writing. She has been published in New Welsh Review. Remember No More is her first novel.
https://jannewton.net/ 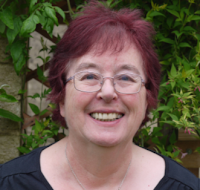 https://promotingcrime.blogspot.co.uk/2017/11/carol-westron.html
www.carolwestron.com
http://carolwestron.blogspot.co.uk/
To read a review of Carol latest book Strangers and Angels click on the title.
Posted by Lizzie at 14:34 No comments: