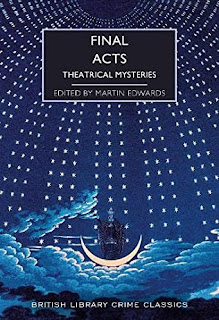 Final Acts is a miscellany of crime stories set in, or related to, all things theatrical.  The collection begins with a 1905 tale by Baroness Orzcy, The Affair at the Novelty Theatre.  When a precious pearl necklace is stolen from actress Phyliss Morgan, suspicion falls on her jeweller.  Orzcy’s celebrated sleuth, The Old Man in the Corner, puts his intellect to work, however, and soon reveals the true culprit.

Next, we meet Inspector Gabriel Hanaud and his friend, amateur detective Julius Ricardo.  The pair must solve a burglary and murder in The Affair at the Semiramis Hotel (1917). Anthony Wynne’s The Dancing Girl was published in 1926.  In this story Dr. Eustace Hailey’s clinical and investigative expertise are put to the test in a particularly complicated case involving his old friends, Lord and Lady Rushmere.

In View of the Audience, sees George Brewster board a train that he believes will take him to Crewe, instead, a terrifying journey awaits him in this 1934 tale by Marguerite Steen.

Then, Dorothy L. Sayers describes a near perfect murder in her highly enjoyable 1936 story, Blood Sacrifice   The next gruesome offering was originally published in a 1941 edition of Strand Magazine.  Brandon Fleming’s The Wrong Make-Up, describes how celebrated actor Sir John Furnival, is found dead in his dressing room.  The circumstances of his death “hint of a murder,” and Inspector Fay is called to investigate.

1944 saw the publication of a more light-hearted offering, The Case of the Ventriloquist’s Doll by Ernest Dudley, featuring Dr Morrell and his trusty assistant, Miss Frayle.  The good doctor is pursuing a cure for the common cold, when he is interrupted by Mr Voxio, a ventriloquist whose dummy, Joey, has been stolen.  Morrell’s medical investigation is briefly shelved whilst he solves the case with his usual efficiency.  Barry Perowne’s 1945, The Blind Spot, is a deliciously creepy tale of a chance meeting between two men in a bar and the perplexing events that follow.  Next, we read Ngaio Marsh’s 1946 story I Can Find My Way Out, in which playwright Anthony Gill awaits the opening night of his play with trepidation and for good reason.  Skulduggery is afoot and when an actor is found dead Inspector Alleyn is called bring order from chaos.

In Roy Vickers The Lady Who Laughed (1948) there seems to be something sinister when June Spengrave dies in unusual circumstances.  Officers attend and suspect Mr Spengrave of murder but are unable to find the evidence they need to get their man.  It takes Detective Inspector Rason from the Department of Dead Ends to unravel the truth.  The Thirteenth Knife, by Bernard J. Farmer was published in 1950 - enjoy the delicious twist at the end.  The next story, also from 1950, was written by John Appleby.  In Drink for an Actor Mervyn Corinth plays a role in which the script requires him to drink some brandy.  It turns out, however, that someone has been tampering with the props, and Inspector Bristow must work out who, where, when and why.

The final two stories involve productions of Shakespearian plays.  The first is Credit to William Shakespeare.  This, the third 1950 publication, was authored by Julian Symons.  Francis Quarles, private detective, happens to be in the audience when the first night of a production of Hamlet turns into a real-life tragedy.  This is followed by a 1958 story from the pen of Christianna Brand.  After the Event begins with an unnamed Great Detective regaling his companions with a case he successfully solved.  Unfortunately for the conceited storyteller, Inspector Cockrill is present and reveals that far from solving the case, the “Great Detective” arrested and charged the wrong man!

Final Acts: Theatrical Mysteries is published as part of the British Library Crime Classics series.  It is a collection that delights and intrigues.  As always in the series, Martin Edwards provides a comprehensive and informative introduction to the anthology.  Equally engaging and helpful are the short biographies of the authors which precede each tale.  A must read for all lovers of Golden Age crime fiction and highly recommended.
------
Reviewer: Dot Marshall-Gent

Martin Edwards was born 7 July 1955 at Knutsford, Cheshire and educated in Northwich and at Balliol College, Oxford University, taking a first-class honours degree in law. He trained as a solicitor in Leeds and moved to Liverpool on qualifying in 1980. He published his first legal article at the age of 25 and his first book, about legal aspects of buying a business computer at 27, before spending just over 30 years as a partner of a law firm, where he is now a consultant. He is married to Helena with two children (Jonathan and Catherine) and lives in Lymm. He is a member of the Murder Squad a collective of crime writers.  In 2007 he was appointed the Archivist of the Crime Writers Association and in 2011 he was appointed the Archivist of the Detection Club. He is a former chair of the Crime Writers’ Association and since 2015, he has been President of the Detection Club. Martin writes three series. He has also edited more than forty anthologies. 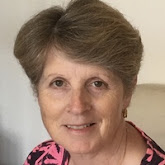 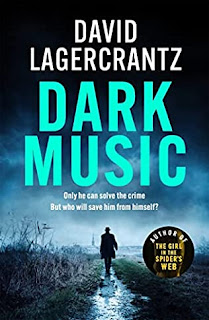 Translated from the Swedish by Ian Giles

The murder of a seemingly harmless immigrant, Jamal Kabir, in Stockholm, initiates an investigation in which local police are forced to second guess why the Swedish foreign ministry let Kabir enter Sweden in the first place, and just how much their decision had been influenced by the CIA.

Martin Falkegren, a young police commissioner anxious to keep up with modern trends, invites Hans Rekke, a rich, former concert pianist, and Professor of Psychology at Stanford University in the USA, to review the case for the Stockholm police. Rekke, now based in Stolkholm and suffering from a severe mental breakdown, is an authority on interrogation techniques and is gifted with extraordinary powers of observation and deduction. He is also a suicidal, unpredictable, drug junkie.

Because community police officer, Micaela Vargas, has a passing acquaintance with Giuseppe Costa, the young man accused of killing Kabir, she is assigned to the investigating team.  Micaela, the daughter of Chilean political refugees, and the sister of two, law-breaking brothers brings a dogged perseverance and a clear head to the investigation. She has reservations about Costa’s guilt and the lack of sensible evidence against him.

The police meet with Rekke who also has doubts about Costa’s guilt. When the investigation stalls Micaela is taken off the case. Dissatisfied with the way the investigation has been handled, she decides to see if she can stimulate the semi-comatose Rekke to help her discover what really happened to Kabir.  Rekke and Micaela make a strange duo. On the surface they have little in common, but in reality, they are almost like pieces of a jigsaw that fit together and feed off each other whilst reaching decisions about how they should proceed. With help from Jonas Beijer in the police station, and information from Rekke’s connections in the foreign office and one of Michaela’s law-breaking brothers, Vargas and Rekke eventually uncover who murdered Kabir and why they did it.

As might be expected from the man who has added three books to Stieg Larsson’s Milennium Trilogy and who is unashamedly inspired by Sherlock Holmes, David Lagercrantz’s Dark Music is a complicated and intriguing story. It takes us from Stockholm in 2003 back to Kabir’s youth in Pakistan, his time at a conservatory in Moscow and his subsequent time as a football referee in Taliban-controlled Afghanistan where music was restricted, before it finally finishes in Germany. It also describes the CIA’s use and abuse of foreign nationals and countries. Dark Music, and I hope several sequels featuring Rekke and Vargas, will be enjoyed by lovers of Swedish Noir.
------
Reviewer: Angela Crowther

David Lagercrantz was born 4 September 1962, in Sweden. He is a Swedish journalist and best-selling author, internationally known as author of Zlatan Ibrahimović's biography I am Zlatan Ibrahimović and as the current writer of the Millennium series, originally by Stieg Larsson.