‘The Watcher’ by Brian Freeman 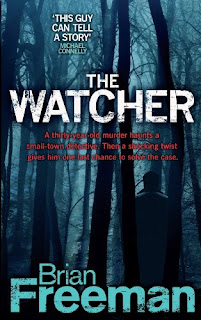 In July 1977 Laura Starr was found beaten to death with a baseball bat.

Now thirty years later Trish Verdure appears on a restaurant patio, where Lieutenant Jonathan Stride is dining and tells him that she was a close friend of his late wife Cindy and that she is writing a book about the murder of Cindy’s sister, Laura. But Jonathan has no recollection of Cindy ever mentioning Trish, even through she persists that she and Cindy were close friends since high school.

When Trish reveals new evidence Jonathan feels he has no option but to re-open the case, even though he is convinced that Trish knows more than she is saying. But for Jonathan it’s not straightforward, he was eighteen at the time and a decision taken then now comes back to haunt him.  Which ever way he turns someone will be hurt, including him. But whilst he battles with his own problems, someone is desperate to keep the secrets of the past in the past.

Brian Freeman was born in Chicago in 1963 and lived in the Bay Area of California for several years before going to college in Minnesota and settling there with his wife, Marcia. Prior to breaking through in the writing world, he was a respected communication strategist and business writer in the Twin Cities and served as director of marketing and public relations for an international law firm. His books have been sold in 46 countries and 20 languages and have appeared as Main Selections in the Literary Guild and the Book of the Month Club. His debut thriller, Immoral, won the Macavity Award. Immoral was chosen as International Book of the Month by book clubs around the world.
http://www.bfreemanbooks.com
Posted by Lizzie at 14:10