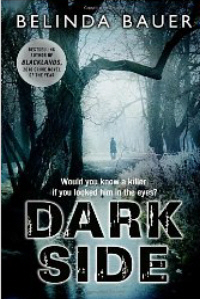 Darkside is Belinda Bauer’s second novel. Her first, Blacklands, I reviewed and thought it was outstanding. It then went on to win the Crime Writers Association Gold Dagger, a pretty amazing feat for a first novel. Darkside is just as good. Like Blacklands, it is set in the village of Shipcott on Exmoor in south-west England, this time in winter as an unusually cold winter brings blizzards to Exmoor and the village becomes virtually cut off from the outside world.

At the centre of the story is Jonas Holly, the village bobby, who has foregone a promising career in the Devon and Somerset Police to care for his beloved wife Lucy who has multiple sclerosis. Life in Shipcott is normally quiet and peaceful so that Jonas can devote himself to caring for Lucy. But then elderly Mrs Margaret Priddy, paralysed and bedridden for three years, is murdered and a crime squad is called in under the direction of Detective Inspector John Merlin who takes against Jonas, refusing to let him to be involved in the investigation except in the most menial capacity. Then there is another murder, this time of the Alzheimer sufferer Mrs Yvonne Marsh. And then three more in the local nursing home. None have anything in common except that they are elderly and frail. Jonas, in spite of being marginalised by Merlin, is determined to track down the killer.

The novel operates on several levels. Merlin is essentially a comic character - the stereotypical urban, macho cop, gritty, a loner, a drinker. He is cynical (‘his greatest gift was that he could see the bad in everyone’), a maverick operating by instinct so that with every death he lurches from one suspect to another saying ‘I like so-and-so for this one’. His squad loathe him, particularly his sergeant who is just hoping that this time he will put enough of a foot wrong to be finally brought down. At a darker level, there are Jonah and Lucy, each wracked with pain and anguish at the inexorable progress of her terrible disease, while the other inhabitants of Shipcott, so far from being bucolic rustics, have their tragedies and their secrets. And at an even darker level, there is a yet more shocking secret which will eventually spin out of control. I was completely gripped by the power of the narrative and the pity and fear it evoked.
------
Reviewer: Radmila May

Belinda Bauer grew up in England and South Africa. She has worked as a journalist and screenwriter, and her script The Locker Room earned her the Carl Foreman/Bafta Award for Young British Screenwriters, an award that was presented to her by Sidney Poitier. She was a runner-up in the Rhys Davies Short Story Competition for "Mysterious Ways," about a girl stranded on a desert island with 30,000 Bibles. Belinda lives in Wales.