‘A Red Herring Without Mustard’ by Alan Bradley 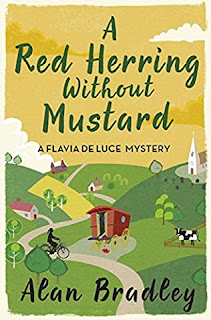 Attending the village fete, eleven-year-old Flavia de Luce pays a visit to the fortune teller’s tent. The Gypsy tells her that she can see a mountain and a woman who wants to come home. For Flavia, whose mother Harriet died in a climbing accident in Tibet when Flavia was less than a year old, this is a wounding disclosure, and in her shock, Flavia topples the lamp doing some serious damage to the Gypsy’s tent.

Needing to learn more Flavia decided to pay the Gypsy another visit but finds that the old woman has been brutally attacked in her caravan. Flavia deduces that the Gypsy’s fortune telling has stirred up someone with guilty conscience - maybe memories of tragic events in the village’s past. Flavia resolves to surreptitiously find out what. But subsequently finding a body in the grounds of her home, puts Flavia firmly in the spotlight of both Inspector Hewitt and her family. But undeterred Flavia users her not inconsiderable skills of deduction to unmask the killer.

Set in the 1950’s in the village of Bishop’s Lacey, this is the third adventure featuring Flavia de Luce, a precocious but interesting and at times enchanting heroine.  Inhabiting the east wing of the somewhat dilapidated seat of the de Luce family, Flavia uses the scientific skills honed in her laboratory, formerly used by great-uncle Tarquin de Luce, to solve the mystery.  As in previous books much of her time is spent avoiding her elder sisters Ophelia (Feely) and Daffy (Daphne) who she is convinced are trying to kill her. Indeed, many of her experiments are dedicated to finding ways to poison, maim or frighten them.

This is a delightful read with a refreshing protagonist - wonderful dialogue and marvellous characters.  Cleverly written with aspects of humour that eleven-year-old Flavia is sure is passing over the heads of the adults, whilst much of theirs passes over her.

Alan Bradley was born in 1938 in Toronto, Canads. Alongside his two older sisters, Bradley was raised roughly 100 kilometres east of Toronto in the small town of Colbourg, Ontario. His mother brought up the children alone after Bradley's father left the family when Bradley was a toddler. Bradley learned to read at an early age, partly because he was a sickly child who spent a lot of time in bed. However, Bradley confesses to having been a "very bad student", particularly in high school, spending his free time reading in the local cemetery because he felt he didn't fit in. After completing his education, Bradley worked in Cobourg as a radio and television engineer, designing and building electronic systems. He then worked briefly for Ryerson Polytechnical Institute in Toronto (now Ryerson, University), before moving to  Saskatoon to take a job at the University of Saskatchewan in 1969. There he helped develop a broadcasting studio, where he worked as Director of Television Engineering for 25 years. He took an early retirement from the university in 1994 in order to become a full-time writer.