‘The Devil’s Dice’ by Roz Watkins 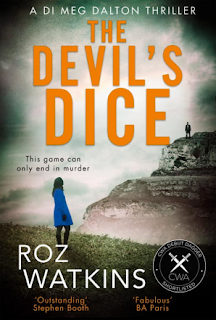 The Devil’s Dice introduces DI Meg Dalton, whose mission it appears from the first page is to 'Reinvent Self in Derbyshire.'

Called to the discovery of the body of a lawyer found in a cave in the Peal district, Meg discovers a bizarre scene.  The lawyer is identified as Peter Hugo Hamilton and it looks as he has scratched his own face to ribbons.  Beside him lies a plastic wrapper of a chocolate and almond cake and carved into the wall an image of the Grim Reaper and the words ‘coming for PHH’.

New to the area Meg soon picks up on the local legends, and soon learns about the cave system below the Devil’s Dice where teenagers go to commit suicide.  But was this suicide or murder.  And where did the cake come from?

From the first few pages we are aware that Meg has secrets. She reads things into the most innocuous comment.  DS Craig Cooper is an old-style traditional policeman and Meg suspects he feels that the job she has should have gone to him.  Early indications are that DS Jai Sanghera will be easier to work with, but only time will tell.

As Meg investigates, she soon becomes aware that the there are rumours of a curse which has dogged the family of Peter Hamilton. Although, there are many unexplained disturbing factors to the death, Meg remains unconvinced of a supernatural explanation. Then another body is found.

With well-fleshed out characters and a perplexing mystery the story moves along at a good pace.  I eagerly await the next instalment in the life of DI Meg Dalton, as I am sure that there is much to be revealed. Highly recommended.
------
Reviewer: Lizzie Sirett

Roz Watkins  is the author of the DI Meg Dalton crime series, which is set in The Peak District where Roz lives with her partner and a menagerie of demanding animals. Her first book, The Devil's Dice, was shortlisted for the CWA Debut Dagger Award, and has been optioned for TV. Roz studied engineering at Cambridge University, before training in patent law. She was a partner in a firm of patent attorneys in Derby, but this has absolutely nothing to do with there being a dead one in her first novel.  In her spare time, Roz likes to walk in the Peak District, scouting out murder locations.