Following a protracted and difficult labour, Lauren Tranter gives birth to identical twins, Morgan and Riley.  She longs to go home with her husband, Patrick, and their two baby boys, but is obliged to remain on the maternity ward an extra night after suffering a post-natal haemorrhage.  As the long summer day darkens into night, Lauren, physically and mentally exhausted, slips in and out of sleep as her babies doze peacefully by her side.  In the early hours she senses an uncanny presence behind the curtain that hangs between her and the adjoining cubicle – fearing that her sons might be stolen she raises the alarm.

Next morning, Detective Sergeant Joanna Harper browses the overnight incident log before beginning her shift.  She is intrigued by a call to the local maternity unit and notes that the situation was resolved within fifteen minutes and treated as a mental health issue rather than a crime.  Police attendance was cancelled before the patrol car arrived to investigate.  Case closed.  Nevertheless, Harper finds herself unable to resist looking into the sparse details of the occurrence; there is something about the description that bothers her, and she decides to pay the complainant a visit.

Little Darlings is a gripping thriller in which changeling tales from the past intrude into the modern world with disturbing consequences.  The narrative offers a visceral description of a mother’s instinct furiously and unequivocally to protect her offspring.  Lauren’s maternal viewpoint is juxtaposed against DS Harper’s conflicting responses as events unfold.  This interesting dual-perspective explores the complex situations that result when people are faced with the critical moments in life - giving birth, being in love, bereavement in its many forms, and the multitude of other events that result in emotional and physical trauma.  The sensitive subject matter is empathetically detailed as Lauren’s feelings of alarm and dread are medicalised by professionals and, downplayed by her husband and friends as they attempt to console and reassure her.  Jo Harper’s determination to discover the truth of what happened to the mother and her sons makes this unorthodox detective an engaging character.  The detective sergeant dauntlessly ignores professional strictures whilst displaying surprising and endearing temerity in matters of the heart.
This is a debut novel not to be missed.  Fast-paced and carefully crafted, the plot accelerates towards a breath-taking conclusion, but the issues raised by the story are impressively haunting.  I read this book in one sitting because I simply could not put it down.

Melanie Golding won the short story prize at the Mid Somerset Festival in 2017 and her work has been featured at the Leicester-based festival Story City and the Cheltenham Literature Festival.
------
Reviewer: Dot Marshall-Gent 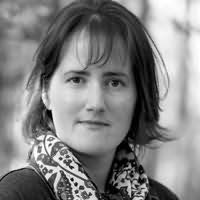 Melanie Golding has been employed in many occupations including farmhand, factory worker, child minder and music teacher. Throughout all this, because and in spite of it, there was always the writing. Her first novel, Little Darlings, is published by HQ in the UK in May 2019, and by HarperCollins Canada and Crooked Lane Books US. Little Darlings has been optioned for screen by Free Range Films, the team behind the adaptation of My Cousin Rachel.
www.melaniegolding.com

A Date for Your Diary in Cardiff

The celebration of Welsh crime fiction and crime writers returns for a second year following its triumphant inauguration in 2018.
This time there is a rather different format with evening talks at various locations in Cardiff,
starting on Monday June 3rd and culminating with a full day at
Cardiff Central Library on Saturday June 8th.

Cardiff Central Hub is more than just a library. It is a modern cultural venue and a community centrepiece, with well-lit open plan floors and spectacular views of the city

. There will be talks, readings, panel discussions and workshops, which will include a panel of Welsh speakers publicising titles in Welsh.

For further details and tickets go to
www.cardiff.gov.uk/crimeandcoffeefestival  .