‘Ring of Guilt’ by Judith Cutler 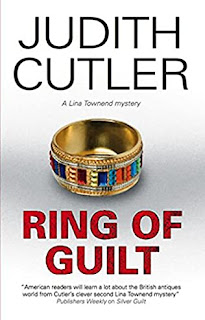 Returning from an auction with a van load of delicate china, the sight of a body lying in a field in the middle of nowhere poses a dilemma for Lina Townsend. Just recently, a friend had found themselves in just such a situation and being a good Samaritan had leapt out of their van to assist and been laid flat out in the road and robbed, so Lina opts for caution and decides to stay put and ring the boys in blue.  Unfortunately, being in the middle of nowhere she has no signal on her mobile and ends up driving further on to obtain one.   Requested by the police to return to the scene, she does so, but the body has gone. The police were less than happy.

Later examining a box of miscellaneous items with her business partner and surrogate father Griff, Lina discovers an unusual ring. Griff thinks that it might be medieval and suggests asking his friend at the British Museum if he can date it. When later at an antiques fair Lina finds another ring of similar design, she sends that one also to Sir Douglas Nelson. Within a short time Lina is being given the third degree by DS Will Kinnersley of the Kent Police.

Between the missing body and the mysterious two rings, Lina’s life is far from dull. Also, adding interest is her biological father Lord Eltham, who resides in a wing of Bossington Hall, his former home now owned by the National Trust. Lord Eltham is possibly my favourite character being mainly interested in a regular supply of champagne with which Lina keep him supplied by selling off the antiques which he managed to squirrel way before the trustees realised. It’s been good to see their relationship slowly developing.

Lina takes on some renovation work on a china jug on behalf of Harvey Sandition who it appears has more than china on his mind. Turning up unexpectedly is ex-love interest Detective Sergeant Morris, but methinks Lina has turned her attention towards Detective Sergeant Will Kinnersely, or has she? – Harvey is very attentive.

In the marvellous mix of characters that Judith Cutler has created around Lina we meet again Mrs Walker, who takes to fairs like a duck to water, and the unscrupulous Titus Oates, although Titus has some surprises in store in this episode.

I enjoyed the scams and personalities that make up the world of antique fairs, and there are many twists and turns in the story that kept this reader turning pages.
------
Reviewer: Lizzie Hayes