‘Murder on the Old Road’ by Amy Myers 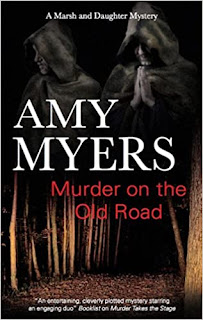 Out for a Thursday lunch time drink at the local village pub The Three Peacocks, Georgia, her husband Luke and father Peter find themselves amongst forty-odd people dressed in medieval costume. Luke jokes they have stumbled into a Brigadoon situation, but it turns out they are the Chillingham Village Drama Group.

They are invited to accompany the drama group who are on a publicity walk along the Old Road to Canterbury dressed as pilgrims to publicise their play. Georgia senses tension between the two half brothers Julian Wayncroft and Valentine Harper, playing the lead parts of the King and Archbishop Thomas Becket and would have declined, but Luke is up for it. Georgia's father Peter is in a wheelchair, so elects to return home. Joining the walk with them is the pub landlord, Tim Hurst, and Anne Fanshawe the vicar. As they walk through Peacock Wood Georgia has an attack of nausea that signifies to her a presence of past evil in that part of the woods through which they are walking. She later learns that a murder took place in the wood - a murder that has never been solved.

Georgia is the other half of Marsh and Daughter who write True Crime. She is eager to speak to her father of her experiences in the wood and later learns from him of the murder in 1967 of Hugh Wyndcroft, the then Lord of the Manor and Julian's father. Georgia is aghast that Hugh had been killed on just such a pilgrimage from Winchester to Canterbury to stage Tennyson's play Becket.

As Georgia probes for information on the murder, she comes up against brick walls, and a divided village, just it was in 1967. When she joins the players for one day, she is aware that feelings are running high. Also, another brick wall is her father's attitude to the death of her brother Rick. There is also tension between her father and his girl friend Janie. And all is not totally plain sailing in her own relationship.

This is very much my type of mystery. Good characterisation, masses of undercurrents, layer upon layer to be peeled away before the truth is revealed. And like all really good books a twist at the end.
Highly recommended.
----
Reviewer: Lizzie Hayes