‘The Perk’ by Mark Gimenez 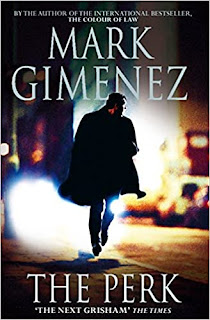 Beck Hardin, high flying lawyer in Chicago is struggling with the recent death of his wife Annie. He tries to be all things, but his work suffers, and he isn’t making it for his two children Meggie and Luke. So eventually he decides to go home to Texas.

He’s welcomed with open arms by his father JB, and very quickly his children are absorbed into the life on a ranch. There are many surprises in store for Beck – surprises form the past and from the grave. From the past he discovers that the daughter of his friend Aubrey was found dead four years previously  - dumped outside the town, and she was just sixteen.  The five-year statute of limitations is set to expire on New Year Eve and Aubrey asks Beck to investigate – he has five months and twenty six days to find and bring the killer to justice.

Although, we know how Heidi Fay died, her killer remains a mystery, and whilst the investigation by Beck is absorbing in itself, the strength of the book, lies in the story of a man recovering from the death of his beloved wife, his rediscovery of his family, and his re-entry into the town he turned his back on when he left for Chicago more than twenty years earlier.  In essence by doing what he thinks is right for his children, for his friend, and for the town, he finds his way through his grief.
Highly recommended.
------
Reviewer: Lizzie Hayes