Heart of Betrayal by Andrew Britton 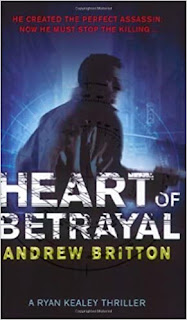 Former Special Forces Officer Ryan Kealey is now living in Maine, lecturing occasionally at the University of Maine as an associated professor of International relations. His partner of six months is Katie Donavon, who isn’t totally sure he has retired.

When Ryan sees on the news a terrorist strike on Independence Avenue, Washington DC – a hit on three cars in broad daylight, killing a US Senator, an outspoken critic of Iranian hard-liners, he waits for the telephone call he knows will come.

Arriving in Langley Virginia, Jonathan Harper Deputy Operation Director at Langley shows Ryan a tape on which he identifies Jason March, an American national, now clearly high up in Al-Qaeda. Ryan Kealey knows Jason March, not a man to make mistakes. So, who can stop him, only one of their own, the man who trained him Former Special Forces Officer Ryan Thomas Kealey. The hunt is on.

Within two weeks Washington DC is again the scene of terrorist devastation. Both Ryan and his new partner British Naomi Kharmai of Central Intelligence, Counter Terrorism, are caught in the operation.

Like all good stories much of the intrigue lies buried in the past. Just what did Jason March do to Ryan, and where exactly is he? Written from multiple points of view with the action switching constantly from Washington to Langley to Iran, and then to South Africa, with a couple of end of chapter cliff-hangers, this is a page turner. The characterisation is excellent - I chuckled at the reference to Naomi scratching her butt. Also, some great sexual tension. A stunning unexpected climax. Recommended.
------
Reviewer: Lizzie Hayes

Andrew Britton was born in Peterborough, England, in 1981. He spent his formative years in England and Camlough, Northern Ireland, a small village which is home to most of the family on his mother's side. In 1988, his family immigrated to the United States, taking up residence in Grand Rapids, Michigan. Just before his junior year of high school, Britton moved to Raleigh, North Carolina. Andrew Britton passed away in March 2008, from a heart condition that was previously undiagnosed.