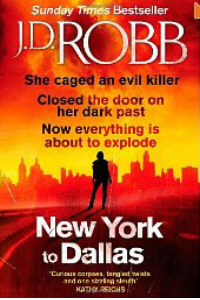 Set ca 2060 Lieutenant Eve Dallas is a respected homicide cop now happily married to her reformed bad boy billionaire Roarke. But this investigation takes Eve back twelve years to when she was a rookie cop and took down the paedophile McQueen.

Now McQueen has escaped from jail and his one thought is to revenge himself on the cop who brought him down – Eve Dallas.

Written from the points of view of both Eve Dallas and McQueen it is in places harrowing as he describes his unspeakable acts. For Eve the reappearance of McQueen, opens old wounds. Things she has buried for along time come to the surface as she faces who she was when she brought McQueen to justice.

A dual between good and evil – a must for fans of this series
------
Reviewer: Lizzie Hayes

Nora Roberts (writing as J D Robb) was born in Silver Spring Maryland, the youngest of five children. She published her first J D Robb novel featuring homicide cop Eve Dallas in 1995. Since that time she has published 55 books in this series. Nora is a member of several writers’ groups and has won countless awards from her colleagues and the publishing industry.
Posted by Lizzie at 13:40