‘Curtain Call at the Seaview Hotel’ by Glenda Young 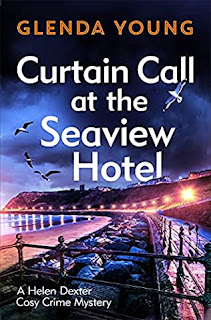 
It has been a year since the death of her husband Tom, and Helen Dexter found herself sole proprietor of the Seaview Hotel, in the seaside town of Scarborough.

With the possibility of the Modernist Theatre on the sea front closing down, theatre manager Taylor Caffrey is putting on a play in two weeks’ time that he hopes will save the theatre, providing the play is a success, if not the Modernist faces the bulldozers.

The theatrical group have booked eight rooms at the Seaview Hotel, but only seven breakfasts for you to cook, Helen tells Jean, her award-winning cook, as one room is for props. Then taking a deep breath says, ‘one of the troupe is a vegan’. Vegan? Jean sucked air through her teeth.

On arrival, Chester Ford, playwright, director, lead actor introduces his Dawley Theatre Group of merry men and women. Or as Helen quickly finds out, maybe not so merry. The star of the show Miss Carmen Delray is clearly not happy with Chester or the hotel.

But tensions between the guests is not Helen’s main concern, getting the hotel a fourth star is top of her list and she has heard on the grapevine that the hotel inspector is in the area.

The death of one of the actors, puts pressure on the group and the urgent need for a replacement. With the survival of the Modernist at stake, Helen finds herself roped in to helping. This also gives her a chance to study the other actors to see if she can get any idea who could be a killer.

If this wasn’t enough to keep her occupied, Helen has been receiving threatening phone calls, that make no sense to her. But then her car is vandalised.

With an intriguing mystery, this is the second book in this series, and I loved it. The characterisation is brilliant, and I enjoyed the personal relationships not only between the theatre group, but also the hotel staff. In my youth I worked in a seaside hotel, and it brought back so many memories reading it.  Highly recommended. More please.
------
Reviewer: Lizzie Sirett.

Glenda Young credits her local library in the village of Ryhope, where she grew up, for giving her a love of books. She still lives close by in Sunderland and often gets her ideas for her stories on long bike rides along the coast. A life-long fan of Coronation Street, she runs two hugely popular fan websites. 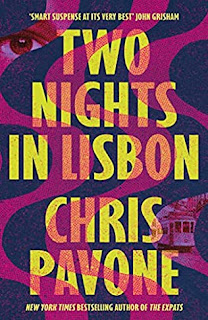 It’s 7.28am in Lisbon when Ariel awakes and find herself alone, where is her husband, John? She does the usual things, showers and dresses. Perhaps her he has gone for an early morning walk, or perhaps he is at breakfast – but he’s not! Enquires of the hotel staff produce nothing, no one owns to have seen him.

Eventually she tries the police, who seem unconcerned about someone who has been missing for only a few hours. Could he have been kidnapped she asks?  As Detectives Antonio Moniz and his partner Caroline Santos quiz Ariel it emerges that she and John have only recently married, and that he is a consultant, and that this is a business trip. ‘Do you usually go on business trips with your husband?’ Answer 'no, this is the first time!'

Her next port of call is the American Embassy, but she fares no better there. Saxby Barnes, with the plastered on smile of a politician, asks her‘ does your husband go by another name?'

Although, the local police and Embassy have not been that helpful, she is an American tourist with a missing husband, and so she has sown seeds – why would he have just disappeared? Is he involved in something untoward? He has not left a note for his wife, and he doesn’t answer his mobile, so where is he?

As the story progresses more of Ariel’s history emerges. Desperate and frightened, Ariel knows of only one person who could help, but who is also the last person she would want to ask for help.

The writing and characterisation are brilliant. As the story twists and turns, lies and secrets come to light. Complex, clever and intricately plotted you will not be able to put this book down. A real thriller. Not to be missed. Highly recommended
------
Reviewer: Lizzie Sirett

Chris Pavone grew up in New York City and attended Midwood High School in Brooklyn and Cornell University. He worked at a number of publishing houses over nearly two decades, most notably as an editor at Clarkson Potter, where he specialized in cookbooks; in the late nineties, he also wrote a little (and mostly blank) book called The Wine Log. His first novel, The Expats, released in the U.S. and the U.K. in early 2012, was an instant New York Times bestseller, and is being published in fifteen languages on five continents, and developed for film. Chris is married and the father of twin schoolboys, as well as an old cocker spaniel, and they all live in Greenwich Village and the North Fork of Long Island.