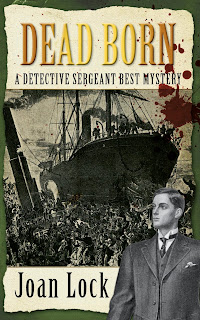 Published by The Mystery Press,
1st February 2013.
ISBN: 978-0-7524-6456-5 (PB)In 1878 Detective Sergeant Best is sent undercover to investigate as suspected baby farm in Islington. He becomes involved in the famous tragedy of a river steamer sinking in Victorian London while he is trying to discover those responsible for the deaths of new born babies. The atmosphere of London at that time is palpable in this book, particularly in the descriptions of the streets, transport and the centrality of the river. Geographically this all feels enormously accurate to me though I can claim no real knowledge of the minutiae of Victorian London. I liked the way that the attitudes and preoccupations of the day, often as revealed in the newspapers, are revealed to the reader. The issue of women learning to swim, for example, becomes significant since councils had been offered the chance to develop swimming baths just before the tragedy had shown how few women could swim.

The story is an exciting one moving at a good pace. The mysteries are engrossing, and the character of the detective is sympathetically shown. This is the second book in the series of Detective Sergeant Best mysteries in a reprint of the original 2001 publication; hopefully the whole series will be reprinted in paperback.
----------
Reviewer: Jennifer S. Palmer
Joan Lock has seven books in the series - the first is Dead Image and all the titles are prefaced by the word Dead ( there is also a modern mystery unconnected to the Best series called Death in Perspective). She has also published non fiction books mostly about the early British police force.

Joan Lock A former nurse and policewoman, Joan Lock is the author of eleven non-fiction police/crime books, including three on Scotland Yard's First detectives.  The latest of these is Scotland Yard's First Cases (Hale, 1211). She has also written a history of the British women police – a subject on which she is an authority – as well as radio plays and documentaries. Her crime fiction includes short stories and eight novels, one modern and seven Victorian featuring the charismatic Detective Sergeant Ernest Best