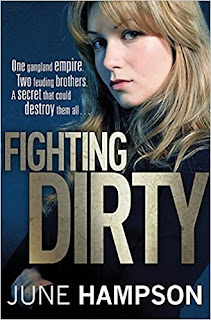 There is no doubt that June Hampson weaves a good story.  This is the sixth book in the saga of Daisy Lane.  Now in 1983 Daisy is still living in her beloved Gosport, having refused to move to London to live with gangland boss Roy Kemp, who has taken over where the Krays left off.  Daisy is unsuccessfully trying to exercise some control over her wayward son Jamie, who has matured from a troublesome teen into a hardened criminal with no respect for life, and is surprisingly the son of an Inspector in the police, given the circles in which Daisy moves. Her eldest son Eddie, whose father was the love of her life and is now dead, is soon to be released from prison where he is serving time for manslaughter.  Yes Daisy does have her hands full.

There are many undercurrents and strands to the lives of Daisy, her family and extended family.  Vera who runs an establishment called `Heavenly Bodies' is presented as Daisy's staunch friend and a person with a good heart. `Heavenly bodies' is a brothel, and from the tone of the story exists to provide a home and help for young women who have nowhere else to go.

The book is a mixture of violence and good deeds. It emphasises strongly that there is good in all of us even the most violent of cold-killers. Personally, I am not sure that being kind to animals or loving one person to distraction can in anyway be a justification for killing people who get in your way, or don't see things the way you do. Yet, the lives of these colourful people suck you in making it one of those books you just have to keep reading.
-----
Reviewer: Lizzie Hayes

June Hampson was born in Gosport, Hampshire, where she still lives. She has had a variety of jobs including waitress, fruit picker, barmaid, shop assistant and market trader selling second-hand books.