‘The Night Season’ by Chelsea Cain 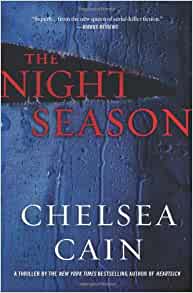 This book opens with a prologue – Memorial Day 1948. Many books have prologues and in general I do not see the point of them but this one is poignant to the story that later unfolds.  For a start it features named people, not some unnamed stalker that grabs a jogger and kills her (the victim is usually a woman). This prologue grips you – well it did me.

Chapter one switches us to the present where the city of Portland is in crisis owing to the heavy rains that have burst the banks of the Willamette River. There have been several fatalities but the last victim to be recovered from the waters was dead before she hit the water. When other victims turn up with the same MO Police Detective Archie Sheridan realises that there is a possible serial killer at large. Reporter Susan Ward covers the story, and some unusual evidence has her intrigued.

It becomes clear early on that Police Detective Archie Sheridan and Susan Ward have a connection, and although they are in a way working together, Archie is in the main concentrating on the current crop of crime, but Susan sniffs out a link to the past and for me this is the fascinating part of the story.

There is a heart stopping climax and some unexpected endings tied up that had me hooked into this authors style. This is the first book in the series that I have read, and reference is made to Archie Sheridan’s previous relationship with Gretchen Lowell who is currently awaiting trial.  I just must now read the earlier books. Recommended.
-----
Reviewer: Lizzie Hayes

Chelsea Cain says Journalism, that was my college goal at the University of California, at Irvine. I also went to graduate school in journalism at the University of Iowa where I wrote a column for The Daily Iowan. But there was one thing about journalism that Chelsea says she didn’t like at all: talking to strangers. Writing books, on the other hand, requires talking to far fewer people. And Iowa City, home of the lauded Iowa Writers Workshop, was full of people writing books. Then she moved from Iowa to Portland to New York and back to Portland with brief stays in Florida and Pennsylvania, and in the process wrote a dozen books over the next ten years, but not all were published.