‘The Wicked Girls’ by Alex Marwood. 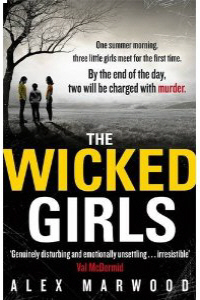 In the year of 1986, two twelve-year-old schoolgirls meet and by the end of the same day they have committed murder. Fast forward to twenty years in time and they are living very different lives under new identities. Kirsty Lennox is now a journalist who is reporting on a series of murders of young female tourists in a seaside town. As her investigation goes on, she comes face to face with Amber Gordon for the first time since that fateful day in nineteen eighty-six. Can their shared secret now stay hidden? and what will happen to each of them now?

This is a tightly constructed and page-turning story. The characters are rich, and real. For a first novel it was extremely well- written, no excess, and no veering away from the all-consuming plot. It has its surprises, and many of them. It is a dark, and dangerous, psychological, thriller, guaranteed to keep you thinking after you closed the very last page.
-------
Reviewer: Linda Regan
www.lindareganonline.co.uk

Alex Marwood is the pseudonym of a successful journalist who has worked extensively across the British press. Alex lives in South London and is working on her next novel.

Linda Regan is the author of six police procedural crime novels. She is also an actress. She holds a Masters degree in critical writing and journalism, and writes a regular column, including book reviews, for three magazines. She also presents the book-club spot on BBC Radio Kent. She is an avid reader and welcomes the chance to read new writers. To read a review of Linda's most recent book.

Cambry Nguyen left home young.  She was a wild child who hurtled outrageously through life, leaving a series of unsuitable boyfriends strewn in her wake.  When she plunges from Hairpin Bridge in Montana, the official verdict is suicide, and given her history who is going to question that?  Only one person - her twin sister, Lena.  Lena, a studious, solitary, and vulnerable figure, writes book, film, and video game reviews.  As it turns out she also has the tenacity of a terrier and is determined to discover what really happened and why Cambry’s broken body ended up in the chasm 200 feet below the crossing.

Lena coolly arranges to meet highway patrol man, Corporal Raymond Raycevic, ostensibly the last person to see Cambry alive.  Raycevic agrees to take Lena to the spot where he reportedly saw her sister leap to her doom, but he’s hiding something, and Lena begins to push for answers.  It soon becomes clear that the unlikely sleuth will need to summon up reserves of strength and courage previously untapped if she is to avoid her twin’s gruesome fate.

Malign forces ooze through the text from the very beginning of the story.  A third person narrator reveals present and past events through the perspectives of each twin.  Interspersed between these two points of view are Lena’s blog posts, first-person commentaries of the period that led up to her accompanying Raycevic to the spot from which Cambry jumped.  This fractures time within the narrative and combines with the remote setting and dizzy height of the bridge to create a sense of dislocation, disbelief and confusion within both Lena and the reader.  Having led us to the top of the bridge, the author unleashes a literary rollercoaster as the plot screams along through a series of breathless free-falls punctuated by brief periods of respite before the next unexpected descent into terror.  Early on a literal inferno begins to surround the protagonists in the form of the Briggs-Daniel wildfire. As the fire moves ever closer to the protagonists it becomes a metaphor that reflects the peril that threatens to consume Lena and her sister’s killer.

Hairpin Bridge is a spell-binding and exciting crime novel.  It twists, turns, and confounds the reader.  One minute I wondered why on earth Lena didn’t just get in her car and flee to safety, the next I found myself cheering as she edged a little closer to avenging her twin’s slaughter.  Chilling, disturbing and sometimes horrifying, Hairpin Bridge is a book that I could not put down.  An outstanding read.
------
Reviewer: Dot Marshall-Gent

Taylor Adams directed the acclaimed short film And I Feel Fine in 2008 and graduated Eastern Washington University with the Excellence in Screenwriting Award and the prestigious Edmund G. Yarwood Award. His directorial work has screened at the Seattle True Independent Film Festival and his writing has been featured on KAYU-TVs Fox Life blog. He has worked in the film/television industry for several years and lives in Washington state. Eyeshot was Adams' debut novel, published by Joffe Books.