‘Murder at the Manor’ by Anne Penketh 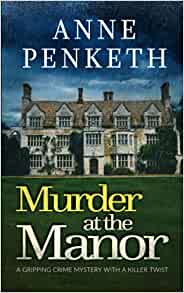 Set in Norfolk in the coastal village of Tideburgh, Dennis Iverson has arranged a party for his son Rupert to celebrate his 25th birthday.  The party is being held at Iverson Hall, a Georgian Manor house owned by Dennis, who no longer lives there owing to the house edging ever closer to disappearing into the sea by costal erosion. While it remains viable Dennis rents it out as a party house.

Rupert has deemed it to be a fancy dress do based on the theme of ‘The Court of the Son King’, with himself dressed as Louis X1V and all his guests also in costumes of the time.  Everything is set for a swinging time. But next morning Rupert is found dead.

Called to the scene are Detective Inspector Sam Clayton and Detective Sergeant Julie Everett.  With 25 party guests they have a lot of interviews to sit through. But not just 25 guests as it quicky becomes apparent that Dennis is not liked in the village, firstly because of the noise and disruption caused by the parties, and secondly owing to his attitude to the plight of some of the villagers whose houses are close to the edge of the cliffs and he, on the council, is doing nothing to help those unfortunate villagers.

As investigations progress many secrets emerge, but then a second death occurs – is this related to the death of Rupert?

In the midst of this DI Sam Clayton is called away and Julie is in charge. Readers of the three earlier books will be aware that Julie has experienced trauma in her life and is to a degree still struggling but determined to cope.

Anne Penketh is an author and journalist based in Paris. She is originally from Lancashire but has worked all over the world as a foreign correspondent. Her first crime novel, Murder on the Marsh, was published in 2016.  Her latest crime novel, Play Dead, is the third in a series of murder mysteries set in Norfolk and featuring DI Sam Clayton. In 2017 she wrote a one-woman show, Sugar Baby, which was performed on the Edinburgh Fringe.
Posted by Lizzie at 19:38