‘Before I go To Sleep’ by S J Watson 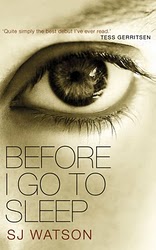 Waking up in a strange bed in a strange room lying next to someone we do not recognise and of whom we have no memory, may have happened to one or two of us after a great party and a hard nights drinking, but gradually memory seeps back usually accompanied by a massive pain in the head, and as things become clearer, infinite regret.   But what if there is no memory at all, and what if it happens every day that we wake.  This is what happens every day to Christine Lucas – she knows she is Christine Lucas only because that is what the man beside her tells her, he is, he says Ben, her husband. Christine, if that is who she is, and she only has this stranger’s word for it, feels nothing for this man who says he loves her.

When she is contacted by a doctor who says he can help her but tells her not to tell her husband about their meetings, she is more confused, as she has to trust this man who says he is her husband as she has no one else, and he clearly loves her and is taking care of her.

Each day that she wakes the only truths that she knows are the ones he tells her. Although, she has no memory she does have feelings and senses, and gradually with an idea suggested by Dr Nash, she begins to suspect that maybe her husband is not always truthful with her, but as she has no memory, she cannot trust even the things that she herself has supposedly written as she has no memory of writing them, and maybe they too are false.

This is an incredible debut book. It’s a long time since I felt such involvement with a book.  The whole premise is frightening, for Christine’s memory loss covers the previous twenty years, so each morning that she wakes, she not only has to learn who she is, but every day come to terms with the fact that she went to bed a girl in her late twenties and wakes up a woman in her late forties – that alone is traumatic enough. She doesn’t recognise her own body or the face that looks back at her in the mirror.

We talk of great psychological thrillers, but this tops them all.  Highly recommended.
-----
Reviewer: Lizzie Hayes 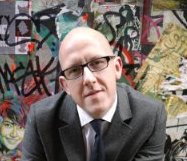 SJ Watson's first novel, Before I Go to Sleep, became a phenomenal international success. A bestseller around the world, it won the Crime Writers' Association Award for Best Debut Novel and the Galaxy National Book Award for Crime Thriller of the Year.  The film of the book, starring Nicole Kidman, Colin Firth and Mark Strong, and directed by Rowan Joffe, was released in September 2014 and is now available on DVD. S. J. Watson was born in the Midlands and now lives in London.