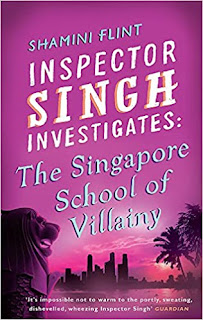 Mark Thompson, senior partner in Hutchinson and Rice is found dead at his desk one evening, after he had called all the partners together for an emergency meeting. To obtain entry to the offices a key card is necessary which puts all the partners firmly in the square, and squashes the partners’ view that someone off the street must have gained entry and done the deed!

Assigned to the case is Inspector Singh, a continual disgrace to his superiors, being overweight, permanently dishevelled and generally not the biscuit. The only thing that keeps him from being thrown off the force is that he is the best detective they have.

Unfortunately, in this instance Inspector Singh falls foul of his wife who has been charged with finding a wife for Jagdesh Singh, who turns out to be a partner in Hutchinson and Rice and therefore a suspect in the case.

Whilst Inspector Singh exudes authority and commands respect, he meets with less than approval from his wife, whose sole interest in life is her good name in the family. As Singh’s current investigation now encompasses Jagdesh Singh, he is, as she puts it investigating ‘one of our people’, and in her words ‘I don’t know where to put my face’. Singh wonders whether he dare suggest a paper bag, but decides against it.

This series is a total and unbelievable joy. The mysteries are complex and interesting, the characters fascinating, and Inspector Singh a larger-than-life character you so want to meet. To those of you who haven’t had the pleasure of reading the first in this series, just do it now. Highly recommended.
------
Reviewer: Lizzie Hayes
Earlier books, Inspector Singh investigates A Most Peculiar Malaysian Murder and A BaliConspiracy Most Foul

Shamini Flint lives in Singapore with her husband and two children. She began her career in law in Malaysia and also worked at an international law firm in Singapore. She travelled extensively around Asia for her work, before resigning to be a stay-at-home mum, writer, part-time lecturer and environmental activist, all in an effort to make up for her ‘evil’ past as a corporate lawyer! Shamini has sold over 500,000 books since she began writing six years ago.  There are five in the Inspector Singh series.
Posted by Lizzie at 15:12