This is the fourth book to feature Detective Chief Inspector Andrew Fenwick and Sergeant Nightingale, but in this book, they are both involved in different investigations.  Nightingale is investigating a con man who prays on the elderly but comes unstuck when he encounters a retired Major.   Although an upholder of law and order the major takes matters into his own hands to protect his neighbour. Nightingale conducts a masterful interrogation, during the course of which much of the Major’s character is revealed provoking in this reader pity, admiration and revulsion in equal measures.

But the power of the book lies in the moral and career dilemma that eventually Andrew Fenwick faces, following his investigation into the disappearance of thirteen-year-old schoolboy Sam Bowyers, which leads him to a paedophile ring which becomes known as The Choir Boy investigation. The descriptions of the lives facing these boys sold into prostitution are harrowing. The outcome of his investigation poises him of the horns of dilemma as he ponders the right and wrongs of acting on the knowledge he has gained.

The story is told from multiple points of view, which sets an energetic pace. It is also a poignant read not only in terms of a well-written and powerful story, but in the eloquent and moving prose that reveal the feelings of the characters. Whilst the investigation into the paedophile ring provokes strong emotions, so in its own way does Nightingale’s investigation.

An excellent book, that I will re-read, and that I cannot recommend too highly.
---------
Reviewer: Lizzie Hayes
Earlier books in the series are Requiem Mass, Fatal Legacy, Grave Doubts. 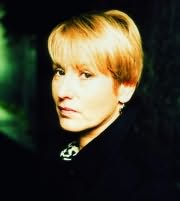 Elizabeth Corley was born and brought up in West Sussex. Married with a stepdaughter, she manages to balance her crime-writing with a position as Chief Executive, Europe for a global investment company. A one-time committee member and vice-chairperson of the Crime Writers' Association, she is still an active member, while finding time to pursue her outside interests of travel, gardening and music. There are five books in the Detective Inspector Andrew Fenwick mystery series.
Posted by Lizzie at 20:40