‘The Body in the Fjord’ by Katherine Hall Page 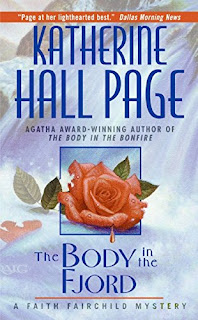 When Ursula Rowe receives news from her dearest friend Marit Hansen that her daughter Kari’s boyfriend Erik has been killed, she immediately makes tracks to set out for Norway. Hearing the news, Ursula’s daughter Pix Miller knows that she has to travel with  her mother.

When they arrive in Norway they learn that Erik had been killed whilst working with Kari for the tour group ‘Scandie Sights’.  So Pix and Ursula decide that the quickest way to investigate what happened is to get close to the people on the tour and so they do just that, they join the tour as two innocent American tourists.

Whilst we meet the many characters on the tour, and with Pix still feeling that she is a novice compared with her friend, that intrepid sleuth Faith Fairfield, the author does a marvellous job describing the breathtaking beauty of Norway.

As in my view, in all good mysteries past secrets play a big part and as Pix gradually uncovers these secrets, a fascinating tale is revealed. 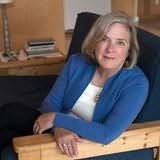 Katherine Hall Page is the author of twenty-one previous Faith Fairchild mysteries and a collection of short fiction, Small Plates. She has won multiple Agatha Awards and has been nominated for the Edgar, the Mary Higgins Clark, the Maine Literary, and the Macavity Awards. She lives in Massachusetts and Maine with her husband.
Posted by Lizzie at 20:57