‘I Am Half-Sick of Shadows’ by Alan Bradley 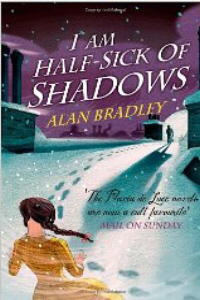 Published by Orion,
3rd November 2011.
ISBN: 978-0-4091-1420-8
It’s a cold winter in the 1950’s, and devotees of this series will know that with the fortunes of the de Luce family being in a dire state, it will be cold indeed in Buckshaw the family seat, which is fast becoming a ruin.  In an effort to stem deterioration and improve the family’s financial situation Colonel de Luce has rented out Buckshaw to a film company - well not in its entirety, the family consisting of the Colonel and his three daughters and his staff will remain in residence, with their rooms off-limits, with a number of rooms being assigned to the film company.   Eleven year-old Flavia de Luce, budding scientist, has big plans for Christmas which she is brewing in her laboratory in the East wing – luckily it’s so cold in the East wing that no one visits and Flavia can experiment to her heart’s delight – although her method of experiment to prove or disprove the existence of Father Christmas is somewhat controversial and may provoke comment.
.
For Flavia’s two sisters Ophelia (Feely) and Daffy (Daphne), both who Flavia is convinced hate her for some reason she cannot fathom, the arrival of the screens most glamorous star Phyllis Wyvern is a high spot on what was expected to be a dreary Christmas.
With filming, cameras, cables, lights and an impromptu Christmas Eve performance attended by many of the villagers, when a heavy snowfall cuts Buckshaw off from the rest of the world, there is chaos indeed.  As everyone finds a corner and settles to wait out the weather, someone has murder in mind.  With the house cut off Flavia users her powers of observation and deduction to find the killer.  But soon despite the weather Inspector Hewitt is on the case and does not welcome Flavia’s interference.  Undeterred she continues her own investigations which leads her into great danger.
Flavia continues to be an engaging and interesting protagonist. This is a delightful entry in this marvellous series and is highly recommended.
-----
Lizzie Hayes

Alan Bradley was born in and grew up in Cobourg, . With an education in electronic engineering, Alan worked at numerous radio and television stations in , and at Ryerson Polytechnical Institute (now ) in , before becoming Director of Television Engineering in the media centre at the of in , where he remained for 25 years before taking early retirement to write in 1994.
In July of 2007 he won the Debut Dagger Award of the (British) Crimewriter’s Association for his novel The Sweetness at the Bottom of the Pie, the first of a series featuring eleven year old Flavia de Luce.
Alan Bradley lives in , with his wife Shirley and two calculating cats.