‘The Diviner’s Tale’ by Bradford Morrow 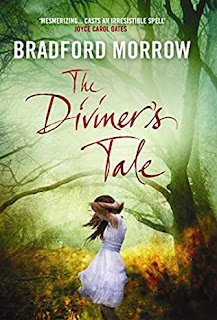 Cassandra Brooks is a water diviner. Dowsing the Henderson land for water she comes upon a young girl hanging from a tree.  Being in an isolated spot she has to go someway before she can inform the authorities of the girl’s death.  When the police reach the spot there is no sign of the girl.

Already regarded to be eccentric, but for her childhood friend Neil who is now the local Sheriff, Cassandra would most likely have been charged with wasting police time. But Neil instigates a search of the area and a young girl is found – mute, but fitting the description of the young girl Cassandra described.  But Cassandra knows that it is a different girl.

There is no doubt that this book is fey but gripping.  It is one of those books that sucks you in from the first page when we learn of the circumstances surrounding the death of Cassandra’s brother. Now a single mother of twins, and a school teacher although Cassandra tries hard to fit in by her water diving she is certainly different.  Following the death of her brother she and her father have drawn closer together not least because he is also a water diviner.

Whilst the powers that she possesses are left to the reader to determine. The truth behind the finding of the young girl is locked in Cassandra’s past.

Bradford Morrow was born on 1951 in Baltimore, Maryland, Bradford Morrow grew up in Denver, Colorado, and has lived or worked in a variety of places. As a teenager, he traveled through rural Honduras as a member of the Amigos de las Americas program, serving as a medical volunteer in the summer of 1967. The following year he was awarded an American Field Service scholarship to finish his last year of high school as a foreign exchange student at a Liceo Scientifico in Cuneo, Italy. In 1973, he took time off from studying at the University of Colorado to live in Paris for a year. After doing graduate work at Yale University, he moved to Santa Barbara, California where he worked as a bookseller until relocating to New York City in 1981, where he founded the literary Journal Conjunctions and began writing novels.
Posted by Lizzie at 20:45