‘Fathers and Sins’ by Jo Bannister 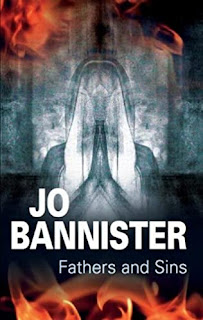 When ballet dancer Agnes Agnew becomes engaged to Robin Firth, she knows that he has been married before, but she has never met his ex-wife or his twenty-year-old son Matthew (known as Mouse) who live in a Cotswold village. She does know, however, that Mouse is not quite like other young men: when a child he was involved in a fire and the experience had a lasting emotional effect while his mother, who rescued him from the flames, was badly scarred which has made her bitter and resentful of her son. Now there is a phone call from a hospital: Mouse has been badly injured while driving a van. Agnes and Robin rush to the hospital and discover, first of all, that there had been a woman in the van with Mouse, who died in the accident, and that she was Mouse’s mother. Then it appears that Mouse was drunk which horrifies Robin because Mouse had promised never, never to drink and drive. Finally, it seems that the van had deliberately crashed onto the railway line in an apparent suicide attempt as a train was shortly expected; had it not been for a train drivers’ strike Mouse would also have been killed. As it is, although he has survived, he remembers nothing of the incident.

Robin is so angered by Mouse’s breach of trust that he returns to London leaving Agnes with Mouse in the cottage. However, there are some discrepancies:  the local vicar, Peter Parsons, insists that Mouse never, ever drank at any time, let alone when driving, and there are some elements about the scene of the accident which lead Agnes and the vicar to suspect that there are some things that don’t quite add up. But then there is another fire, this time at the local church, which is almost totally destroyed except that a mysterious Crusaders’ banner donated by the family at the local manor, the Fraynes, is completely unharmed. This attracts the attention of a band of New Age hippies and their charismatic leader who camp near the church and will not budge until they have seen the banner which Colonel Stewart Frayne and his daughter Felicity have taken to their house for safekeeping.

Although the crash, which is at the heart of the story, happens near the beginning, subsequent events appear to force it into the background. However, in the end, where events come quickly to a dramatic climax, it is clear that the mystery of the crash and the mystery of the banner are connected in a thoroughly satisfying manner.
------
Reviewer: Radmila May

Jo Bannister started her career as a journalist on a local weekly paper. Shortlisted for various prestigious awards, she held the post of editor at The County Down Spectator for several years before leaving to pursue her writing full time. She lives in Northern Ireland.

Radmila May was born in the U.S. but has lived in the U.K. since she was seven apart from seven years in The Hague. She read law at university but did not go into practice. Instead she worked for many years for a firm of law publishers and still does occasional work for them including taking part in a substantial revision and updating of her late husband’s legal practitioners’ work on Criminal Evidence published late 2015. She has also contributed short stories with a distinctly criminal flavour to two of the Oxford Stories anthologies published by Oxpens Press – a third story is to be published shortly in another Oxford Stories anthology – and is now concentrating on her own writing.
Posted by Lizzie at 16:06