‘Agatha Raisin and the Busy Body’ by M C Beaton 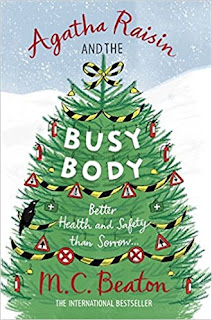 Discovering that she is no longer in love with her ex-husband James Lacey, Agatha decides that she will this year spend Christmas in a warmer climate. She settles on Corsica and leaving her second in command Toni Gilmour in charge of the detective agency heads off for a restful Christmas on a Mediterranean island. The hotel falls far short of Agatha's expectations, there is no restaurant in the hotel, its cold, and there seem to be no taxis, so walking seems to be her only option which is playing havoc with her arthritic hip. Eventually Agatha calls it a day and heads for the airport and home.

Back in her village of Carsely, there are no decorations, not even a Christmas tree on the green owing to John (Grudge) Sunday, of the Cotswold Health and Safety Board. Prompted by her friend Mrs Bloxby, the vicar's wife, Agatha agrees to attend the `Our Ladies' Society which is to be held in the village of Odley Cruesis with the vicar's wife Penelope Timson presiding, to see if anything can be done about John Sunday.  While they are all partaking of a medicinal brandy someone does something about John Sunday, something permanent.

The following day Agatha is visited by Miriam Courtney, who asks Agatha to find out who killed John Sunday, as she is currently chief suspect having threatened to kill Sunday after he threatened closure of the opening of her Manor House to the public in the summer months owing to her not having a wheelchair ramp.   As Agatha investigates, she finds suspects everywhere, Mr Sunday had been very busy - the village shop cannot have wooden shelves in case of splinters, no candles in the church in case they fell over and burnt someone, the list is endless. Agatha is hoping Miriam did do it as she is monopolising Agatha's friend Sir Charles Fraith.  Out of the woodwork crawls Tilly Glossop possible love interest of John Sunday, and a feisty little woman she is, who suggests Agatha speaks to Carrie Brother whose dog fouled the village Green.  Oh! The joy of village life.

Christmas comes and goes, the daffodils poke through and then a second murder occurs, but is it related to the murder of John Sunday.  Agatha puts her nose to the ground and sets off to sniff out the murderer.

Initially I didn’t take to Agatha Raisin, she is selfish and can be vitriolic, although she does have an endearing side, and I did enjoy this entry in the series. Some of the off-cuff remarks are wonderful, and maybe Agatha says what many of us think but don't say.  There is some entertaining writing, and good characterisation.  A must for all the many Agatha Raisin fans.
-----
Reviewer: Lizzie Hayes 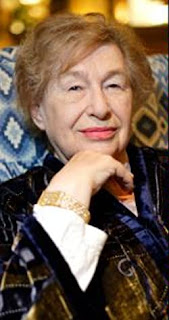 M.C. Beaton  (1936-2019) was born in Glasgow, Scotland, in 1936 and started her first job as a bookseller in charge of the fiction department in John Smith & Sons Ltd. While bookselling, by chance, she got an offer from the Scottish Daily Mail to review variety shows and quickly rose to be their theatre critic. She left Smith’s to join Scottish Field magazine as a secretary in the advertising department, without any shorthand or typing, but quickly got the job of fashion editor instead.  She then moved to the Scottish Daily Express where she reported mostly on crime. This was followed by a move to Fleet Street to the Daily Express where she became chief woman reporter. After marrying Harry Scott Gibbons and having a son, Charles, Marion went to the United States where Harry had been offered the job of editor of the Oyster Bay Guardian. Subsequently, both got jobs on Rupert Murdoch’s new tabloid, The Star, and moved to New York. Anxious to spend more time at home with her small son, Marion, urged by her husband, started to write Regency romances. After she had written over 100 of them under her maiden name of Marion Chesney and getting fed up with 1811 to 1820, she began to write detectives stories. On a trip from the States to Sutherland on holiday, a course at a fishing school inspired the first Hamish Macbeth story. They returned to Britain and bought a croft house and croft in Sutherland where Harry reared a flock of black sheep. But Charles was at school, in London so when he finished and both tired of the long commute to the north of Scotland, they moved to the Cotswolds where Agatha Raisin was created.