‘The Shaping of The Union’ by Donna Fletcher Crow 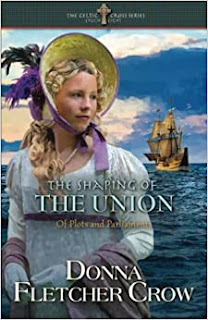 Donna Fletcher Crow has meticulously researched this momentous period in Ireland's history and has retold the story through the eyes of two main female protagonists.

In 1996 the American Mary Hamilton and her fiancé Gareth are set to return to his native Scotland in despair after their efforts to bring about peace for the young people of Belfast through their reconciliation centre is ruined by a violent trashing of the centre and the wounding of Gareth.  However Mary is drawn to read their hosts' family journal recounting the historic struggles of past families on the area.  In 1789 Lenny Price a feisty young woman and her brother Evan join forces with the McCracken family to fight for peace for the Nation and freedom from British imperialism.  This ultimately involves them with the revolutionary plans of Wolf Tone a charismatic American who Lenny is drawn to.  Many adventures follow Lenny and her compatriots which eventually involves her to discover a spy in their midst who is bent on ruining all their plans.

This is a fascinating fictional re-working of turbulent times in Ireland and brings in well-known characters such as John Wesley and provides the reader with a deeper understanding of the possible motivations of various groups of Irish radicals and conservatives, Unionists and Separatists and their families and followers.  The book ends with a return to 1996 and evidence of the Troubles which were besetting Belfast at that time.  We are led to anticipate the next episode in the sequence of events.
-------
Reviewer: Toni Russell 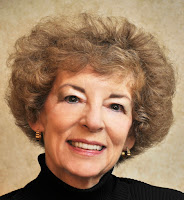 Donna Fletcher Crow  is a former English teacher and a Life Member of the Jane Austin Society of America. She is the author of 50 books, mostly novels dealing with British history.  The award-winning Glastonbury, A Novel of the Holy Grail, an Arthurian grail search epic covering 15 centuries of English history, is her best-known work.  She is also the author of The Monastery Murders: A Very Private Grave, A Darkly Hidden Truth and An Unholy Communion as well as the Lord Danvers series of Victorian true-crime novels and the literary suspense series The Elizabeth & Richard Mysteries. Donna and her husband live in Boise, Idaho.  They have 4 adult children and 12 grandchildren. She is an enthusiastic gardener.

To read more about all of Donna’s books and see pictures from her garden and research trips go to: http://www.donnafletchercrow.com/ 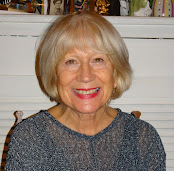 Toni Russell is a retired teacher who has lived in London all her life and loves the city.  She says, ‘I enjoy museums, galleries and the theatre but probably my favourite pastime is reading.  I found myself reading detective fiction almost for the first-time during lockdown and have particularly enjoyed old fashioned detective fiction rather than the nordic noir variety.  I am a member of a book club at the local library and have previously attended literature classes at our local Adult Education Centre.  I am married with three children and five grandchildren.’
Posted by Lizzie at 12:35 1 comment:

‘The Edinburgh Mystery: And Other Tales of Scottish Crime. Edited by Martin Edwards. This latest British Library Crime Classic consists of seventeen short stories set in Scotland, or with a Scottish connection, dating from 1885 to 1974.

The oldest stories are by familiar names: Stevenson, Conan Doyle, Orczy and G K Chesterton. From then on, the names are less familiar, apart from Josephine Tey and Michael Innes, but one of the joys of this series is that more details are given on each author – in this case, their better known novels, so that you can follow up someone whose story you particularly liked. The backgrounds include the cities of Edinburgh and Glasgow, small towns, sinister castles, and the shooting and fishing areas of the Highland countryside.

The opening story, Markheim by Robert Louis Stevenson (1885), is an atmospheric account of the mind of a murderer. Three later stories also focus on giving the characters psychological depth. Bill Knox’s The Alibi Man (1965) centres on a man who’s been kidnapped and locked in a cellar – but why? The Running of the Deer, by P M Hubbard (1974), has a landlord supervising his neighbour’s hind shooting. He feels muderous undercurrents between his two men. In Hand in Glove, by Jenny Melville (1974), Mistress Lindsay, a small-town shopkeeper, feels there’s something wrong with her lover, the Provost’s nephew – but what’s he planning, and why is he so anxious to repossess his letters to her?

Several stories exploit the ‘feel’ of place. G K Chesterton’s The Honour of Israel Gow (1911)  is a Father Brown story set in a lonely, half-ruinous castle, where a sinister black-clad retainer lurks in the grounds. Footsteps by Antony Wynne (1926) is also set in a castle, and includes ghostly footsteps and a final scene in a vault. Josephine Tey’s Madame Ville d’Aubier (1930) has two young men finding a cold welcome in a French inn. In The Body of Sir Henry, by Augustus Muir (1929), a young Borders constable on duty on a dark, wet night sees what he’s convinced is a dead body in a car.

There are excellent classically plotted whodunits, creating body, suspects, clues and solution in a few pages. The Edinburgh Mystery, by Baroness Orczy (1902) features her ‘Old Man in the Corner’ solving a fictitious cause célebre – was Edith Crawford a murderess as well as a gold-digger?  John Ferguson’s The White Line (1929) is set aboard an ocean liner. Either of her suitors might have stolen Sally Silver’s diamonds, but how to catch the thief? Before Insulin by J J Connington involves a young heir to a fortune dying in a nursing home, leaving his estate to a pretty nurse – can you detect the flaw in her story? The Case of the Frugal Cake by Margot Bennett (1939) features Aunt Ellen who was too mean to use eggs in a cake .. so which of her heirs baked the one which killed her? Cyril Hare’s Thursday’s Child (1959) has an equally short, clever plot, with a businessman going to a remote island.

Finally there are several great examples of ‘twist in the tail’ stories. A Medical Crime, by J Storer Clouston (1920) has a young private investigator on the trail of a mysterious burglar who’s disturbing the peace of a small town. H H Bashford’s The Man on Ben Na Garve (1933) has a birdwatcher seeing a crime. The Fishermen by Michael Innes stars his series detective, John Appleby, now retired. Failed playwright Vivarini is apparently trying to make peace with three men he’s quarrelled with – but a fishing party includes his death.

Edwards has also managed to track down a little-known Sherlock Holmes story, The Field Bazaar (1896), written to raise money for a sports facility for students, in which Holmes demonstrates how he know Watson was thinking about giving money to that very cause.

An excellent collection with great reads for odd moments, and it’s given me several new authors to search out.
------
Reviewer: Marsali Taylor

www.marsalitaylor.co.uk
Posted by Lizzie at 13:21 No comments: