‘Someone Else’s Son’ by Sam Hayes 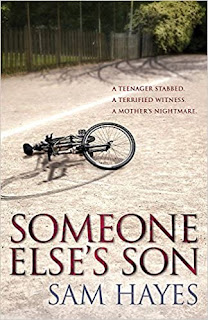 Carrie Kent is a chat –show host. In her daily morning TV show she exposes the lives of cheating partners, benefit swindlers, underage sex – it’s real life in its raw state, that of poverty and violence, and millions of miles away from Carrie’s own life of luxury and privilege.

Her son Max has left his private school in favour of a state school where he is enrolled as Max Qinell son of Brody Quinell who lives in a dismal block of flats on a run down estate inhabited by drug dealers, and gangs.  For all that he has materially Max’s life is far from happy, and he leads an isolated life until he meets Dayna Ray. The book follows the separate lives of this dysfunctional family. And then Carrie receives a call that her son has been murdered and the reality of her TV show becomes her truth.

This is a brilliant piece of writing portraying a child who could have anything money could buy and is in fact greatly loved, but there is just no real communication between mother and son. It is a sad  but poignant tale.

Sam Hayes grew up in the Midlands and has lived in Australia and America. Her writing career began when she won a short story competition in 2003. She lives in a three-hundred-year-old farmhouse in a Leicestershire village with her Australian husband and three children. She also writes as Samantha Hayes.
Posted by Lizzie at 13:11