‘When the Thrill is Gone’ by Walter Mosley 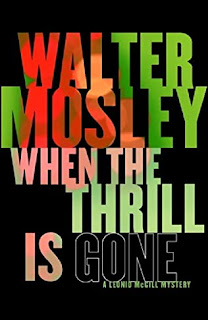 This is the third in the series featuring Leonid McGill an ex-boxer turned PI. With the economic recession times are hard for everyone and Leonid is having trouble finding the rent, so the appearance of the beautiful Mrs Chrystal Tyler offering him a stack of money to protect her against her rich husband whose former two ex-wives are dead but not from natural causes is a case he cannot turn down. But he has a bad feeling about it – things don’t stack up, so he does some digging, with surprising results.

Leonid is fifty-one-years-old, with a chequered personal life. His wife Karen is playing around with younger man. His stepson Twill is leaning towards a life of crime, and his other son Dimitri is also giving cause for concern. And sadly, his old friend Gordo, also an ex-boxer is dying of cancer.

A request from the gangster Harris Vartan, a former colleague of his father’s has Leonid looking for his angle. Leonid suspects a hidden agenda but in memory of his father he hesitates to say no.

Whilst pursuing the interests of his moneyed client, which bring him into contact with his ex-girlfriend Aura, his missing persons case produces some surprising revelations.

Written in the first person, the narrative is peppered with the wisdom of Leonid’s father Tolstoy McGill. As the story progresses, we learn that Leonid has a criminal related past which he is now doing his best to re-dress, or maybe atone is a better description, producing a feel-good factor book. If the character of Leonid McGill has a flaw it seems to be related to his height, we learn early on that he is of short statue, or in this pc world maybe I should say virtually challenged. In any confrontation, and there are many, he draws attention to his own lack of height but his incredible power and strength, once or twice would have been enough.

The story is rich in well-developed characters that leap off the page. The writing is marvellous, and I am amazed to learn that this writer has written thirty-five books, and this is the first I have read – something to remedy. Highly recommended.
-----
Reviewer: Lizzie Hayes