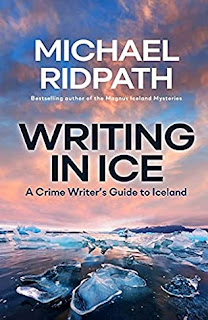 Michael Ridpath first visited Iceland in 1995 as part of a publicity tour for his book Free to Trade - a book which I greatly enjoyed, as I did all the following eight in his Financial Thriller series.

From the description of his first glimpse of Iceland it was clear that he was fascinated by all he saw despite the lack of trees. I will not attempt to describe how Iceland captivated him, his first hand descriptions of the country you need to read in his words.

However, it was ten years before he thought of setting a book there and this guide shows the fascinating journey that he made in discovering the country and its history.  How he built a picture of his protagonist, who although Icelandic had lived a large part of his life abroad and who could therefore see his country through the eyes of a guest, thus, bringing both cultures to his job as a policeman in Iceland. Also, how the procedures for arrest and evidence differ, and the length of time they could keep a suspect in custody while the bulk of the  investigation takes place.

Seeking a plot he became fascinated by the Sagas.  You cannot visit Iceland without being aware of the Sagas.  There are more than 40 that have been preserved and can be found in old manuscripts, which you can see in in Reykjavik.

I found this a most informative book, and one matter I was delighted to have made clear to me was the question of names which I had once heard explained at a book launch at the Icelandic Embassy, but I still didn’t really understand. But this is quite clearly explained in the book and once I had mastered that there were actually no surnames, it all became clear.

The only part over which I have a question mark is the elves or the ‘hidden people’ as they are often known as in Iceland.  I do not believe in ghosts, elves or fairies.  Although at the last Mystery Fest Day conference held by Mystery People in Portsmouth, the question arose on a panel, and the question was asked of the audience if they believed in ghosts, and to my amazement more than 50% did!  This subject is covered relatively extensively in Chapter 14 and backed up by several stories, but I am still not convinced.

Informative and entertaining, once you read Michael’s description of the breathtaking scenery you will want to visit it yourself.  I heartily recommend Writing in Ice.
-------
Reviewer: Lizzie Sirett

Michael Ridpath was born in Devon in 1961 but brought up in Yorkshire. He was educated at Millfield, Merton College, Oxford. Before becoming a writer, he used to work in the City of London as a bond trader.  He has written eight thrillers set in the worlds of business and finance. In 2010 he published the Where The Shadows Lie, the first in the Fire and Ice series featuring an Icelandic detective named Magnus Jonson. He has published four further books in the series.  In between the writing the series he has published three standalone novels the most recent being Amnesia in 2017. He lives in London.