‘The Body in Berkeley Square’ by Lynn Brittney 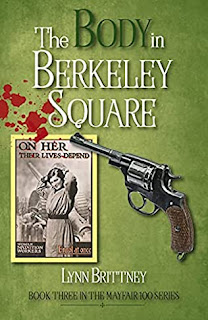 It’s 1915; the war wasn’t over by Christmas despite the government’s assertions, and army recruitment is decimating the all-male police force. To modern day readers the solution may seem obvious – but more than a century ago the very idea of women investigating crime was scandalous. Not that that stops Chief Inspector Peter Beech.

Wounded at Mons, he is no longer fit to fight; instead, he has gathered a team composed mainly of ladies, who undertake detection in a manner which nowadays would be regarded as undercover work. His trusty Sergeant Tollman, who is too old to join up, and ex-boxer Constable Rigsby, invalided out like Beech, are as farsighted as the chief inspector, as indeed is Police Commissioner Sir Edward Henry.

This time the ladies find their own mystery to solve. Doctor Caroline Allardyce and pharmacist Mabel Summersby attend a lecture on toxicology and are faced with the unidentified body of a young woman who clearly suffered from some kind of poisoning. With the help of solicitor Victoria Ellingham and her unconventional mother Lady Maud, they set about identifying the woman. Before long it turns out she was murdered, and they all find themselves involved in something much more complex.

Much of the action takes places in a munitions factory, and the author has clearly done her scientific research. The side-effects of handling cordite and nitro-glycerine are clearly set out, along with a lot of detail about the work which women do better than men in these hazardous places. Caroline, Mabel and Victoria set about protecting the women workers’ health, and gather information about the company while they’re about it. Rigsby's Aunty Sissy and his redoubtable mum Elsie set up a canteen, which proves a hive of useful gossip. Rigsby recruits a friend from his boxing days to suss out the packing area, to ascertain where materials are being sent. And Beech goes on a perilous journey with the dashing Commander Todd.

It all adds up to a no-holds-barred investigation by a bunch of plucky and perceptive characters. And as if that wasn’t enough, there’s even a helping of police corruption, and a hint of romance. It’s all resolved more or less satisfactorily in the end, of course – which goes to show that women were sadly under-estimated a century ago.
------
Reviewer: Lynne Patrick

Lynn Brittney has fifty-two plays, books (fiction and non-fiction), and foreign translations of her books registered for PLR. She began novel-writing in 2005 and the first book in her Nathan Fox Elizabethan spy trilogy was nominated for the Waterstones and Brandford Boase Prize. In 2016 she created the Mayfair 100 series, set in WW1. The first two books – Murder in Belgravia and A Death in Chelsea have been published in the UK by Mirror Books.