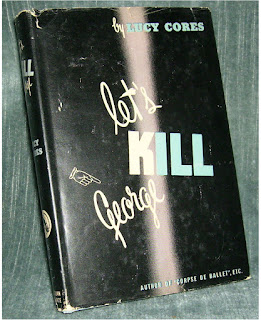 This is a favourite book, not because it’s a great mystery,  although it did keep me intrigued for close to forty years, but because it evokes memories.  In my early teens I used to baby-sit to earn some money, mainly to buy Agatha Christie books at the weekend.  As soon I was alone, and the children sleeping I used to explore the book shelves. On one such occasion I found Let’s Kill George. I was intrigued by the title and settled down for a read. All too soon the house occupants returned and I was on my way home.  So I did not discover who had killed George.

In the 1960’s there was no internet, just wonderful second-hand bookshops full of dusty tomes. Wherever I went, and there was a book shop I searched for Let’s Kill George. Unfortunately I had not taken a note of the author and I became resigned to the shaking of the head when I entered yet another second-hand book emporium and enquired of the proprietor if he had a book entitled Let’s kill George. As the years passed I became resigned to never learning who had killed George.

Then, one day in 1996 there was the Internet, and I had the whole book world at my finger tips. And within a short time I had located Let’s Kill George,by Lucy Cores, and bought from the USA for mega money, a first edition of a book which I now came to know had been published in 1946. However no cost was too much to learn just who had killed George.  It was a wonderful moment when finally after searching for close to forty years I held the book in my hands. Initially as I started reading I found it rather dated, but then I was drawn in and found it greatly enjoyable and finally I learnt who had killed George.

Lucy Cores was born Lucy Michaella Cores Kortchmar in Moscow 14 January 1912. She was the daughter of  violist Michael cores and the niece of violinist, Alexandra Cores. Her family fled the Russian Revolution and arrived in the United States in 1921. She attended the Ethical Culture School and Barnard College. In 1942, she married Emil Kortchmar, a screw machine parts manufacturer, and moved to Larchmont, New York, moving in to Manhattan after his death in 1990. They had two children, Michael and Daniel.

She also wrote a number of romance and historical novels. Woman in Love (1951) was based on her own experiences. The Mermaid Summer (1971) was set on the island of Martha’s Vinyard, where she moved in 1957. The Year of December (1974) was about the visit to Russia of Claire Clairmont’s time in Russia. Destiny's Passion (1978) and Fatal Passion (1989) were historical novels set during the British Regency. A story she published in the Saturday Evening Post about a magazine editor raising seven children was the basis for the television show The New Loretta Young show.

Cores also wrote science fiction. Her story "Deborah and the Diinn" which appeared in the September 1959 issue of Fantastic Universe. Lucy Cores also contributed a story to Beyond Time (1976), an alternative history  anthology edited by Willy and Olga Ley's daughter Sandra. The story, "Hail to the Chief", features a President  Richard Nixon unhindered by Watergate who remains in office until 1994.

At the time of her death, in August 2003,  Lucy Cores was writing a novel about Alexandra Pushkin.
------
Lizzie Hayes.