‘Death on the Cherwell’ by Mavis Doriel Hay. 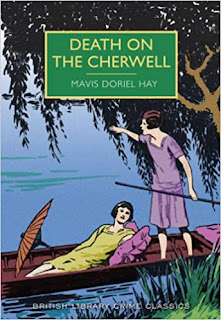 Death on the Cherwell is set in Persephone College, Oxford. This fictional women's college seems to be modelled on St Hilda's, where Hay was educated. The book opens with the death of the unpopular college bursar and follows the investigation into her death. It is presumably a coincidence that Death on the Cherwell was published in the same year as Dorothy L. Sayers' Gaudy Night. The two books have some things in common: both are set in fictional women's colleges, and both address the still debated question of women's education and the necessity for women students to behave with impeccable propriety, very different from the standards required for young men. Another interesting common factor is that both Sayers and Hay object to the condescending term 'undergraduettes' which was favoured by newspaper reporters of the time. As Miss Cordell, Principal of Persephone College reflects, 'Respectable publicity was bad enough because newspaper reporters, however carefully instructed, were liable to break out into some idiocy about “undergraduettes” or “academic caps coquettishly set on golden curls.” But shameful publicity! A death mystery! This was terrible!'

In other ways Death on the Cherwell and Gaudy Night are very different. In Gaudy Night, although there is some interaction with undergraduates, the main action is set amongst the middle-aged dons. It is a novel from the viewpoint of adults. There are times when Death on the Cherwell strongly resembles a girls' adventure story. The action opens with a group of Persephone College first year undergraduates gathered together at the boat house to form a society to curse their unpopular bursar, Miss Denning. Imagine their horror when, a few minutes later, Miss Denning's canoe drifts up to the landing stage, with Miss Denning dead inside it, soaking wet, apparently drowned in her canoe. The girls decide to investigate. They are led by Sally Watson, sister of Betty Watson, who featured in Murder Underground. Betty and Basil also appear in this book, and it is a relief to see that Betty has become more assertive and Basil has grown up.

In this book the reader is allowed to follow the police investigation at first hand. On the first evening, the local inspector, Inspector Wythe, interviews the witnesses and is more impressed with Sally than she is with him: 'Trim and self-controlled she looked now, although her usual buoyant self-confidence had not quite returned. She had sleeked her brown hair and had donned – hastily, yet with a vague sense of fitting herself for a sombre occasion – a tailored, navy-blue frock. A nice sensible girl, thought the inspector, as he looked directly into her brown eyes.

Rather a stupid-looking man, thought Sally, after a brief inspection of his square, stolid face and reddish, toothbrush moustache.'

The local police are soon aided by Scotland Yard, in the person of Detective Inspector Braydon. Braydon proves to be an intelligent, hard-working and capable officer and it is not his fault that the rules of this style of detective fiction prevent him from being the one who solves the case. That honour, of course, is reserved for the amateur sleuths. With Murder Underground and Death on the Cherwell it seems that Hay had established her detective fiction style. This includes the murder of an unpleasant victim, which means that nobody really cares that she is dead and also means that there is a large number of potential killers to choose from. Those solving the crime include reasonably intelligent and hard-working police detectives who are always one step behind the motley band of enthusiastic amateurs. The story is set in a limited community, such as a private hotel or university college; it is told in the Third Person, Past Tense, and includes some lively, often flippant dialogue and well-observed, skilful descriptions.
------
Reviewer: Carol Westron