The coldest eyes and the lewdest hands...

I hate the ground whereon he stands!...

No one shall have his company!”

An achingly sweet voice, so rending in its sweetness as to corrode like an acid when she used it like this.'

The Adult Education music centre at Follymeade House is holding its first Folk Music weekend. Edward Arundale, the warden of the college, prefers classical music, but his adored wife Audrey is eager for this weekend and is running it with the help of the deputy warden and Arundale's fifteen-year-old niece, Felicity. Arundale is there to greet the students but plans to leave the next day on a weekend lecture tour.

The organisers have a stellar group of folk musicians engaged for the weekend, led by Folk Music superstar Lucien Galt, who is known to his colleagues as Lucifer.  All is going well until the legendary ballad singer Liri Palmer joins the conference. She has been in a relationship with Lucien, which was recently broken off, and from the first evening, when she alters the lyrics of the old folk song 'Black is the colour of my true love's hair' and sings her version as a challenge to Lucien, it is clear that she has neither forgiven nor forgotten whatever he did to anger her.

Amongst the students gathered for the weekend are Dominic Felse and his girlfriend Tossa (Theodosia) Barber. Because of her own troubled adolescence, now happily past, Tossa is concerned about Felicity's desperate crush on Lucian, who is notoriously intolerant of clinging fans. '… she was lighting up like a pale, flickering candle, her serious grey eyes warming into brilliance. She gazed wide-eyed at Lucifer, leaning there against the wall with his dark brightness dulling the painted faces on either side of his head, and her small, grave face reflected his slight, sardonic smile like a mirror.'

Dominic is a shrewd observer and it is he who notices something disquieting when he and Tossa are following Lucien, Audrey and Edward along the broad Georgian corridor.

'he happened to glance down at the right, or perhaps the wrong, moment, and see what Tossa failed to see. The three in front were walking close together, the flared skirt of the woman's dress rustling softly against her escorts as they moved. Lucien's left hand, carried loosely at his side, suddenly uncurled its long fingers and delicately and deliberately touched Audrey's hand between their bodies, and in instant response she opened her fingers to accept him. They clasped hands ardently for an instant, and as quickly and smoothly drew apart again.'

Dominic realises that he is not the only person who has seen this subtle display of affection, for Liri is seated in an alcove. 'She sat motionless, the long heavy plait of hair coiled on her shoulder. Her face was as fixed as ice, her nostrils flared wide. She was neither surprised nor disconcerted. She had only seen what she had been prepared to see, something against which she was forewarned and forearmed; but it was at the same time something she would never forget or forgive, and something she would not endure without retaliation.'

The next afternoon is taken up with trips to local places of interest and only a handful of students and performers are left at Follymeade; amongst those who stay behind are Dominic and Tossa, Lucien, Liri, Audrey and Felicity. Lucien and Liri are still in a state of simmering warfare and, as Tossa feared, Lucien has snubbed Felicity's adolescent advances. That evening, when the workshops resume, Lucien is nowhere to be found. However difficult he can be, everybody agrees that he would never renege on a professional engagement. Dominic is one of the search party. He goes to the place where Lucien was last seen and discovers signs of a struggle, the chain Lucien always wore lying broken on the ground and, on the grass, a few drops of blood.

Dominic preserves the evidence and  calls upon the help of his father, Detective Inspector George Felse, and soon a police investigation is under way, but there are many more twists to the story before the masks are stripped away and the truth is revealed.

Black is the Colour of My True Love's Heart falls in the middle of the series featuring the Felse family, and the last time George and Dominic embark on an investigation together. It is a book of incredible contrasts, between the fantasy house of Follymeade and the ordinary world outside its gates and between the main protagonists. (It is fascinating to speculate whether Follymeade bears any resemblance to Attringham House, where Peters helped to set up an Adult Education College.) Peters shows incredible skill in setting the scene and describing the house and all the main protagonists without overloading the first chapter. This is particularly evident in the glorious descriptions of the four adults caught in their dangerous love tangle.

Edward Arundale: 'He had a businessman's smooth-shaven face and commanding air, but a don's aloof, quizzical, slightly self-satisfied eyes and serious smile. He thought well of himself, and knew that the world thought well of him.'

Lucien Galt: 'Dark as a gypsy, with heavy brows and arrogant eyes, built like a dancer, light-framed and quick in movement, intolerant of too close approach, and scornful of adulation as of any other stupidity, he carried his nature in his looks, and took no trouble to moderate its impact.'

Audrey Arundale: 'She was slender and fair and elegant in a plain dark dress, with pale hair piled on her head, and a swimming, wavering walk that seemed to balance the silvery coils like a conscious burden. Her eyes were large and dark, her colouring richly fair, her face bright and animated almost to the point of discomfort.'

Liri Palmer: '...perhaps nineteen or twenty, tall, slim, and of striking appearance. Her face was thin, richly coloured, with long, fine-drawn features and large, calm, fierce eyes as blue as steel. Her great fell of heavy brown hair coiled and spilled around her face with a dynamic life of its own, and was gathered into a waist-long braid as thick as her wrist, interwoven with narrow strips of soft red leather, as though only tethers strong enough for horses could confine it.'

By the end of the first chapter, the scene is set, and the reader is drawn into a maze of intrigue where nothing is exactly what it seems. It is a beautifully drawn and authentic description of the 1960s, a time of immense contrasts in fashion, style, manners and moral choices when generations found themselves on opposing sides of a vast divide. It is book that draws the reader in until it reaches its unexpected but satisfying conclusion.

Black is the Colour of My True Love's Heart was first published in 1967 by William Collins & Co Ltd. It is currently out of print, although it is possible to buy it second-hand.
------ 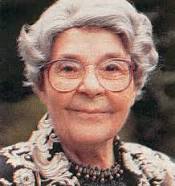 Edith Mary Pargeter, OBE, BEM (28 September 1913 – 14 October 1995), also known by her nom de plume Ellis Peters, was an English author of works in many categories, especially history and historical fiction, and was also honoured for her translations of Czech classics; she is probably best known for her murder mysteries, both historical and modern. She is well known for her medieval-detective series The Cadfael Chronicles, , which later where made into a brilliant TV series starring Derek Jacobi.